The following selections are republished with permission from the pamphlet Froebel’s gifts and block play today written by Jane Whinnett, produced by the Froebel Trust.

“Play is the highest level of child development. It is the spontaneous expression of thought and feeling – an expression which (their) inner life requires.” (Froebel in Lilley 1967:83)

When Friedrich Froebel (1782–1852) gave his cousin a set of wooden blocks for her two young sons as a present and asked her to observe how they played with them, he gave us two gifts in one – a practical resource designed for children’s learning and free play and an invitation to observe and reflect on practice. Both gifts are still relevant today. The blocks became part of the Gifts and Occupations Froebel created for the children in his kindergarten in Bad Blankenburg in the 1840s.

‘[I]t must be something solid which can easily be pulled apart and just as easily put together again; it must be both simple and multiform. So from the material to hand we devise the divided cube, our third gift to the child’. (Froebel in Lilley 1967: 109)

When children are engaged in block play they illustrate a wide range of curricular experiences as well as the more obvious Mathematics and Technologies. They discuss, hypothesise, share, develop narratives, express ideas. They represent what they see in the world around them in the local environment and further afield. Blocks are gender-neutral and cross-cultural. Children do not have to share the same language to play together with blocks.

They represent experiences they have had and can use the blocks to rehearse past or future events. Children can enter the worlds of fantasy or phantasy, for example the children playing with blocks as PlayStation controls are engaging in fantasy as that is something that it is possible for them to do now or in the future, whereas the Jurassic world the children have created is pure phantasy. 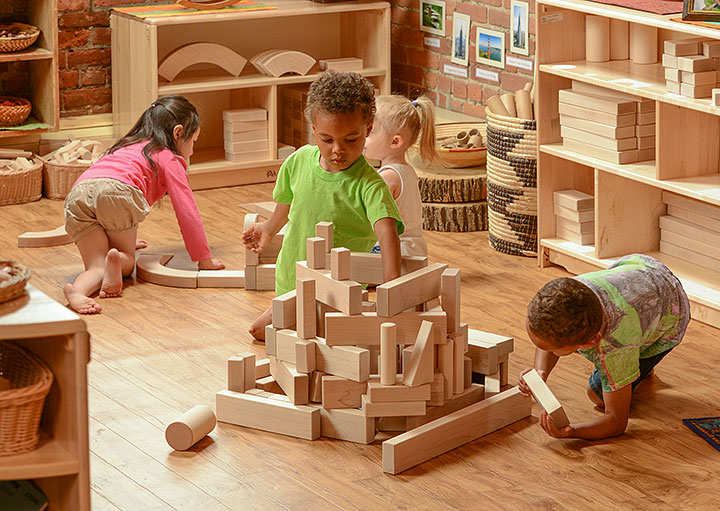 Children play with all sorts of construction toys today. What is different about wooden blocks is that they are free-standing, unlike Lego for example. These blocks must balance. Froebel’s original blocks were quite small whereas the blocks that most settings use now are based on the set of unit blocks developed by Caroline Pratt in 1913 in USA (Provenzo 1983). They are directly related to the shape of Froebel’s blocks in Gift 4, rectangular prisms, in a ratio of 1:2:4.

There are many commercial sets of blocks on the market, so how do you choose which set? Investment in good quality blocks pays off. The blocks in my settings have been there for over 30 years. They are made from sustainable wood and need minimal maintenance. There are four different sets of different scale that integrate with each other and can be used separately. This allows children to build on a large scale, a whole-body experience, or on a small scale, with careful finger movements.

They can play cooperatively or on their own. Sometimes when children begin on their own they join up their play with others in the area. Froebel encouraged children to build on their own and instructed teachers to link their buildings into a story so that everyone was included. 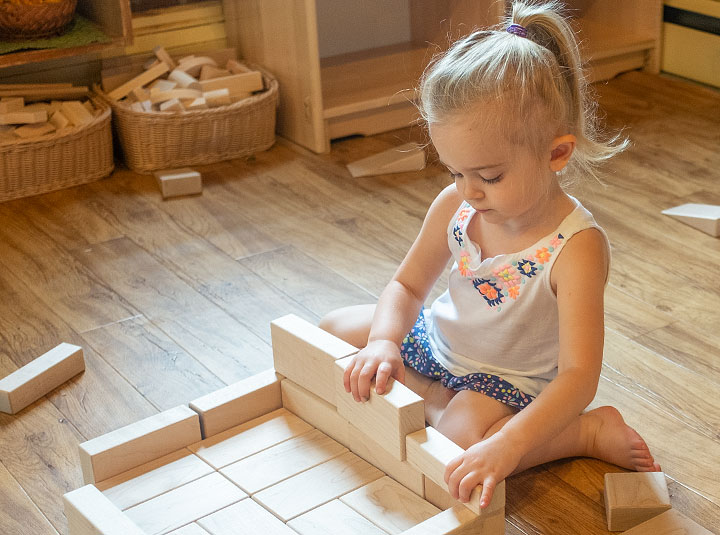 Playing with blocks is a sensory experience. The grain of the wood creates patterns that are visually stimulating. These lines permeate the wood, unlike printed designs, so it is possible to explore in three dimensions around the corners of the blocks. The blocks feel smooth to the touch and are relatively heavy in comparison with other materials that children often play with. They make a satisfying sound when they knock together and can be loud when they collapse! They create their own musical dynamic.

When children first encounter blocks, they need space and time to explore with all of their senses. For young children grasping the block and passing it from hand to hand, hand to mouth or dropping it may be the first exploration. Knocking down, pulling or tipping out blocks sees the child beginning to act on the world around them ‘through his own doing, feeling and thinking,’ (Froebel in Lilley 1967:119). For children who can walk, transporting blocks from place to place, placing them in containers and knocking them down is the beginning of schematic behaviours and developing concepts of quantity, volume and gravity.

When children are building with blocks they may also use other materials, sometimes called ‘loose parts’ (Nicolson 1971). These could be pine cones, shells, pieces of fabric. Exploring how blocks can be combined with other materials can intrigue adults as well as children. When considering the value of loose parts, Simon Nicolson theorised that the degree of inventiveness is directly proportional to the number of variables – or ‘loose parts’ – in the environment (Nicolson 1971). The open-ended nature of blocks means that they can be combined in an almost infinite number of combinations. This is a unique selling point of blocks in comparison with other construction materials that rely on fixings to attach to each other, for example Stickle Bricks or Mobilo, or a force such as magnetism, like Magnetico. 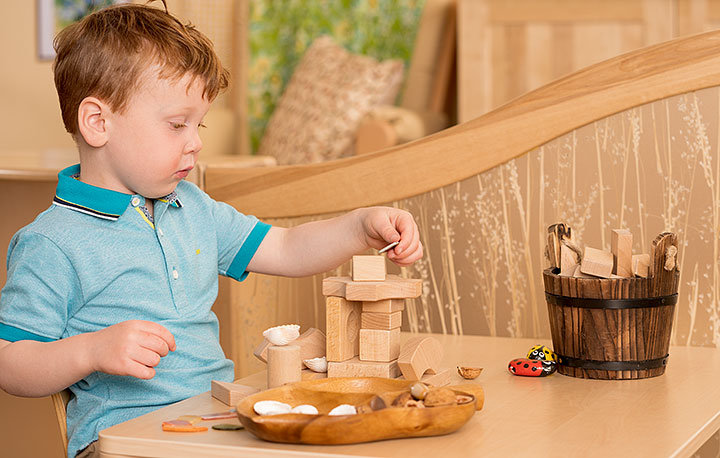 Harriet Johnson (1933) identified a series of developmental stages that builders progress through. The characteristics she described at the different stages can be useful when analysing observations of children and their constructions. The stages described the developing complexity of the structures made and with increasing attention to symbolic representation.

Johnson observed that at first, children tended to work in one dimension creating stacks or rows with the identical surface of the blocks matched on top of one another or next to each other. Sets of blocks of any scale could be used for this. With large hollow blocks, children can use their whole bodies to explore – height and length.

Bridging was the next stage she described, where a block is raised and supported at each end by other blocks. This discovery allows builders to work in two dimensions at right angles to each other. Repeating these combinations supports children in developing a sense of pattern or rhythm.

The third dimension to be added is in the creation of enclosures. Structures now have breadth, depth and height. Johnson described the next stage as patterns and symmetry. Following these stages, children begin to use blocks symbolically to represent features of their environment, and to name their constructions after building. Just as mark-making can develop into writing, conveying meaning from accidental marks, children begin to ascribe meaning to their buildings and name their representations. Johnson described this in terms of early representation.

Naming the structure before beginning to build is one of the characteristics of later representation. In the Froebel Block Play Project, Gura (1992) found that children continue to develop their play in more and more complex ways - using understanding of buttressing, key stones and fulcrum in stunt building, by balancing a block in a way that looks impossible!

Blocks and STEM or STEAM

The foundations of Science, Technologies, Engineering and Mathematics (STEM) can all be developed in block play. The recent addition of Art, particularly in USA, creating the acronym STEAM, connects well to Froebel’s Forms of Life, Knowledge and Beauty by recognising the inherent aesthetic qualities of block constructions. As well as skills in problem-solving, cooperation, designing and making, children apply what they know from the real world in designing constructions.

Two friends spent the entire morning persevering to form a ramp for a car to run down smoothly. They used unit blocks, layering the units and finding wedges to create a slope with a regular gradient. 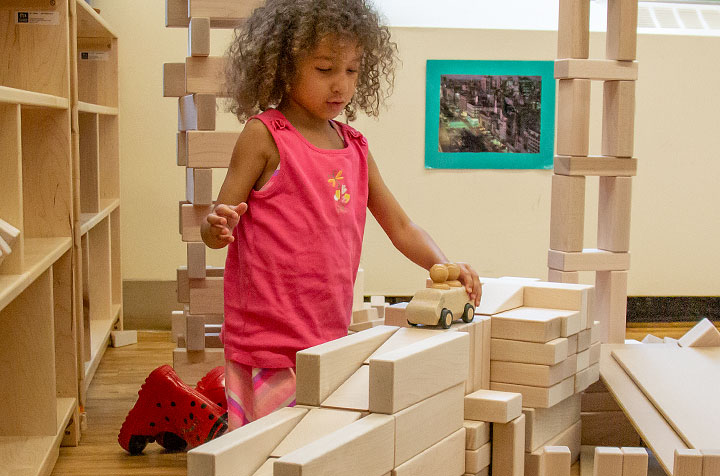 Expert ‘blockies’ can solve problems by using their own tried and tested techniques like creating buttresses (Gura 1992). A sound understanding of Mathematics is required to select the correct shape and number of blocks, as well as knowing how blocks can combine to work together. Long before the child can press a button, flick a switch or swipe a screen, they can develop computational thinking in the simple cause and effect action of knocking down a tower of blocks – a consequential action in the real world.

Originally published by the Froebel Trust. You can find the complete pamphlet Froebel’s gifts and block play today by Jane Whinnett and other available resources at www.froebel.org.uk/training-and-resources/pamphlets

Lilley, I. (1967) Friedrich Froebel: A Selection from his Writings. Cambridge: Cambridge University Press

Nicholson, S. (1971) How NOT to cheat children: the theory of loose parts. Landscape Architecture,October: 30–34

Jane Whinnett MBE is head teacher of two local authority nursery schools in Edinburgh. She believes that Career Long Professional Learning with a Froebelian approach to high quality experiences changes children’s lives, and she has supported initial training for Modern Apprentices as well as Masters students. She is a founder member of the Edinburgh Froebel Network, tutors on the Froebel in Childhood Practice and the M.Sc. Education – Early Childhood Practice and Froebel, at the University of Edinburgh. Jane is a Trustee of the Froebel Trust and chairs the Education Subcommittee.

More from Froebel
Article
Learning from Froebel’s Kindergarten
Now is a good time to familiarise ourselves with Froebel’s original ideas, and to use them to challenge inappropriate practices used with our youngest children.
Article
The importance of play for learning
Childhood is a time for, well, childhood! It’s not a preparation for school or adulthood. It’s a time for allowing children to go at their own pace, giving them the time they need to explore, manipulate, discover, and practise newly…
Article
Return to kindergarten
Kindergarten is a time for the full flowering of the imaginations of children, the time for “mature role play” as an engine of mental and social-emotional development.
Article
The importance of nature in the early years
The world is full of expectation and possibility for young children from the moment they are born.
See all Froebel articles
Explore Block play Products
Explore Block play