A “garden of children” or “the new first grade”?

What has happened to kindergarten? High-stakes testing, the push-down of academic standards, and rigid instruction have pushed play out of this critical year of childhood to such an extent that Kindergarten is now regarded as “the new first grade”. How can we return to the original idea of kindergarten as “a children’s garden” and advocate for ways to restore play?

Why kindergarten is important

Kindergarten is the bridge between preschool and first grade [Year 2]. It is a time when children are filled with curiosity for the world and its wonders. They are developing their skills as scientists, linguists, and actors. Vivian Paley calls kindergarten “the graduate school of fantasy play”. It is a time for the full flowering of the imaginations of children, the time for “mature role play” as an engine of mental and social-emotional development. Truncating this wonderful time of being a child with inappropriate pressure-packed programming interferes with children’s rights. 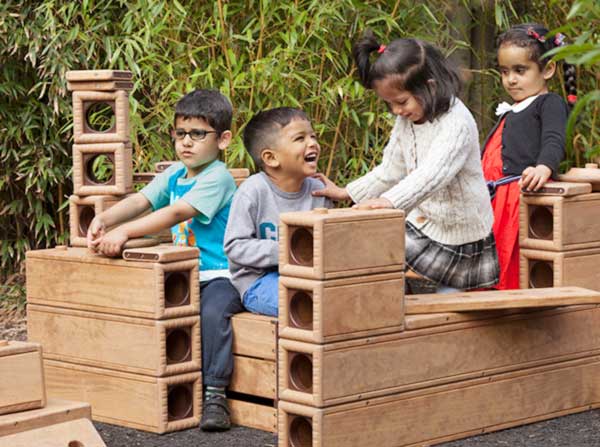 Much of what is now taken for granted about early education dates back to the revolutionary work of Friedrich Froebel (1782–1852). Before he “invented” kindergarten, there was no recognised value in attempting to teach children under the age of seven. His careful observations of human development concluded that the earliest years of life were key in forming the foundation for later education. Most importantly, he recognised that a child’s natural play, or “the spontaneous impulse of the child to explore and act,” was the primary mode for learning. Harnessing this natural motivation was fundamental to the success of kindergarten (Brosterman, 1997).

Froebel also believed that the relationship between educator and child is of utmost significance to learning. He saw the child as an individual to be respected and nurtured, much like a young plant. Froebel conceived of kindergarten – or literally, “children’s garden” – as a fertile space for young children to blossom and grow. The environment was rich with materials and playful experiences (rich soil). The teacher was a nurturer (the gardener), and joint explorer with the children (the plants)(Zinguer, 2015). 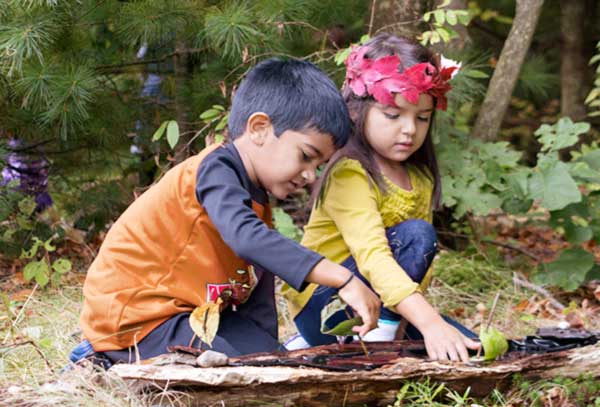 To foster this natural growth and development, Froebel devised materials, known as Gifts and Occupations, to engage his students in playful learning. These ten Gifts were a series of educational, hands-on toys – such as balls, blocks, and tiles – that the children played with at large slate tables, occupying themselves in analysing, making, and constructing guided by the teacher. The gifts were intended to draw out children’s tendency for delineating forms concretely and abstractly. Children would mentally construct part-whole relations, think of opposites, similarities, and differences.

While Gifts related to children’s innate capacities, or “gifts” for thinking and doing, Froebel’s ten Occupations were materials and activities derived from traditional crafts and handiworks that related to a child’s environment. The children were given materials for engaging in activities such as embroidering, cutting, braiding, weaving, intertwining, paper folding, and modelling. This educational play was guided by the teacher and intended to foster two-dimensional and three-dimensional thinking (Hanschmann, 1897).

Despite the fact that the Prussian government outlawed all kindergartens in 1851 (for being “subversive”), the progressive ideas of Froebel’s kindergarten did not die out and soon were spreading throughout the world (Brosterman, 1997). The first kindergarten opened in London in 1851. In 1856, German immigrants began the first kindergarten in the United States in Watertown, Wisconsin. Elizabeth Peabody started the first English-language kindergarten in Boston in 1860. Froebel’s innovative object lessons (Gifts and Occupations) were featured in the 1876 Centennial Exhibition in Philadelphia. Interestingly, parents at the time debated whether kindergarten play should take precedence over learning to read (Beatty, 2000).

Peabody and other educators emphasised that kindergarten was a bridge between home and school, making it a wonderful place to prepare children for later formal education and academic learning. They also emphasised that kindergartens were not “public primary school,” nor “old -fashioned infant school,” but a new, very different, kind of educational institution, “a garden of children” (Baylor, 1965). This original view was generally followed until the mid-20th century. In recent years, however, this has changed to such an extent that it is now said that kindergarten has become the new first grade (Bassok, Latham, & Rorem, 2016).

Rapid changes have happened in education over the past twenty years. Public kindergarten has become a place where children often are wilting under the pressure of misapplied academic content (over-worked soil), direct instruction (aggressive watering), and insensitive assessments (pesticides). Children seldom have opportunities to play in public kindergartens. A crisis exists in which teachers and children are under siege (Miller & Almon, 2009).

Miller and Almon brought attention to this problem in their paper Crisis in the Kindergarten (2009). More recently, Bassok et al. (2016) found empirical support for this picture using nationally representative survey data to compare kindergarten and first grade teachers and classrooms between 1998 and 2010. Comparative results showed, for example, that having a dramatic play area in kindergarten dropped from 87% to 58%, while the use of worksheets went up 17% and 15% for reading and maths, respectively. The1998 survey questions did not even include kindergartens’ “use of standardised tests”; alarmingly, almost 30% of kindergarten teachers reported using such tests at least once per month in 2010.

How to turn it around

The first step to turning this situation around is to recognise there is a problem. Until teachers, administrators, and the public at large admit we are putting undue stress on kindergarten children, the situation will not change. The damage to young children caused by academic pressure is taking its toll on the next generation. All this defies what research has proven true: children learn best through play and joyous discovery. Knowledge, strategies for change, and a political support will emerge from a greater awareness of this problem. Over time this will result in a powerful change in the institution of public kindergarten.

Even before this happens we are not helpless to change the trend. Teachers can find ways to tailor the curriculum to the children. Lessons should emerge from the children’s interests and be suited to their developmental level. Teachers can use play-based and project-based teaching strategies. Kindergarten children are at the prime age to engage in play of various kinds. The wise teacher will harness this urge for play to boost each child’s development in all areas, including academics. Play-based strategies allow children freedom to experiment, explore, manipulate, and transform the concepts and materials introduced in class. There is not a one-size-fits-all approach to learning. 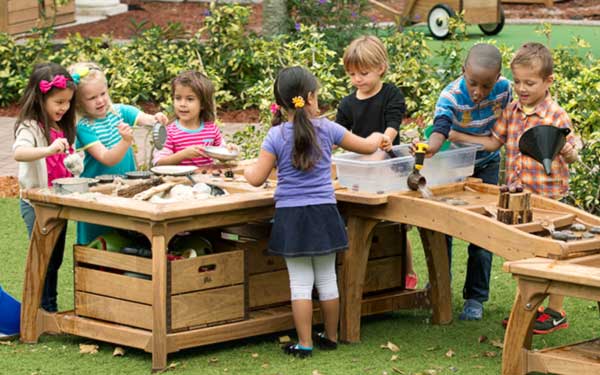 First of all, kindergarten should not look like a classroom with rows of desks and chairs. It should look like a comfortable space where children can interact with each other and with various materials. The classroom should reflect the cultures of the children who attend. The materials and activities should be culturally-relevant, flexible, open-ended, and easily accessible to the children.

What should you hear? A hum of activity. What should you see? Children absorbed in various activities. What might the teacher be doing? Interacting with small groups of children; facilitating the learning by engaging with the children, not directing the children.

This was what Froebel original envisioned when he coined the word Kindergarten. After searching for years for a description for his educational philosophy, Froebel found the inspired answer by combining the words children and garden. Children need the opportunity to freely explore the world in an open and nurturing environment. This result of this careful cultivation is the “creation of a sensitive, inquisitive child with an uninhibited curiosity and genuine respect for nature, family, and society; a reasoning and creative child who would later have few problems learning the three Rs or anything else” (Brosterman, 1997).

Froebel’s vision of childhood and early education is desperately needed today. Perhaps by looking back and seeing how far kindergarten has come from its revolutionary beginnings we can gain insights for the future as we look for ways to restore play.

A kindergarten should be filled with a hum of child-directed activities. 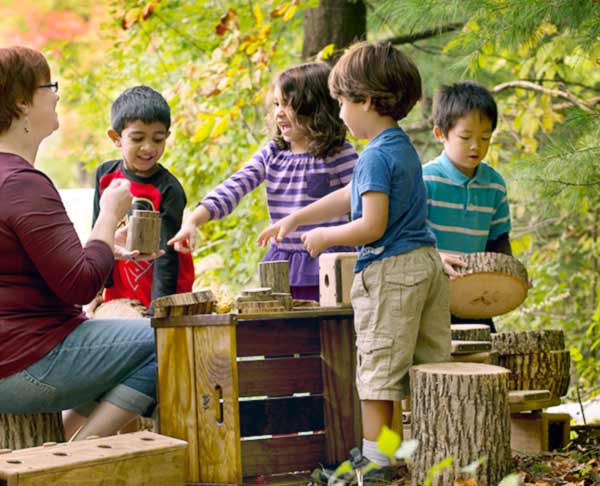 Beatty, B. 2000. 'The letter killeth': Americanization and multicultural education in kindergartens in the United States, 1856–1920 in Kindergartens and Cultures: The Global Diffusion of an Idea, edited by Roberta Woolons, 42–58. New Haven, CT: Yale University Press.

Hanschmann, A. 1897. The Kindergarten System: Its origin and development as seen in the life of Friedrich Froebel. London: S. Sonnenschein.

Miller, E. and J. Almon. 2009. Crisis in the Kindergarten: Why children need to play in school. College Park, MD: Alliance for Childhood

ABOUT THE AUTHOR
Jim Johnson

Jim Johnson is Professor-in-Charge of Early Childhood Education at Penn State. Jim has authored many books, chapters and articles on the topic of play, education and child development. He is Co-Facilitator of NAEYC’s Play, Policies and Practices Interest Forum. Jim also teaches Play as an Educative Process.

ABOUT THE AUTHOR
Karen McChesney Johnson

Karen McChesney Johnson is faculty in Early Childhood Education within the Department of Curriculum and Instruction in the College of Education at The Pennsylvania State University-University Park. She has presented play workshops and sessions at national and international conferences. She currently teaches sections of Play as an Educative Process to teacher candidates.

More from Advocating to meet children’s needs
Article
Learning from intergenerational practice
Pixie sits happily with Irene to enjoy lunch together. They are in their own world, absorbed by each other and beautifully attuned – a partnership of equals. Pixie is 14 months old and Irene 97 years young, born nearly a century apart.
Article
Resiliency
Resiliency reminds me of the pop-up doll I had as a child. It was egg-shaped, full of air, and had a rounded bottom that was weighted. I could push it over and it would always pop back up again. But the full experience of resiliency is…
Article
Ron’s legacy
Ron was our company representative for decades and his sales techniques were unusual to say the least. He cared deeply about children and the importance of a carefree and joyous childhood. Ron was passionate about kids having the best…
Article
Get kids moving
Play is the way kids wring out their brains, for resetting and relaxing their focus so their brains are more alert when it is time to go back to the desk. It is play that helps kids build strengths and motor patterns and that helps develop…
See all Advocating to meet children’s needs articles