The engine that powers all aspects of the journey

The physical maturation of 2-year-olds can be seen in the way they seem to lose their baby chubbiness; this is because fat is being converted to muscle. Also, their legs lengthen and they become more upright. Their previous toddling walk is replaced by heel to toe walking and the ability to run and jump emerges as arches in the feet develop and their knees and ankles gain greater flexibility (Karmiloff-Smith 1994). In relation to their dexterity, their hand and eye coordination is progressing and the crucial pincer grasp has long been added to the 2-year-old’s repertoire of manual skills. Most important is the ability to use these different skills in coordination with each other, such as being able to climb or steer prams.

But of course it is not just the maturation of the nervous system and muscle fibres that enables 2-year-olds to reach this level of physical skill, it is also their insatiable appetite to explore and control their own body and it is the physical play experiences, environment and opportunities that support and motivate their physical learning.

In addition, such physical learning and development are, of course, closely interlinked with all other aspects of development and learning. This is obvious in the link between the 2-year-old’s physical development and cognition, as physical encounters with new exciting experiences stimulate the neural connections in their brains and the conceptual connections in their minds as discussed earlier. Also clear is the support that growing dexterity gives to their creativity and ability to represent as they become skilled in the use of a range of tools for music and mark making, and so on. Perhaps less tangible, although still highly influential, is the link between the 2-year-old’s physical and social development. Rapidly increasing agility and dexterity provide increased opportunities for social interaction, as it enables them to approach, imitate, follow and retreat from other children. They have more control over how physically close they are to their Key Person, including being able to escape from their close supervision! As they discover the physical control they now have and enjoy what their bodies can do, their sense of self and confidence grows. This can be stifled or enhanced by the disapproval or encouragement of others, when they attempt, for example, to pour a drink at snack or go head first down the slide. 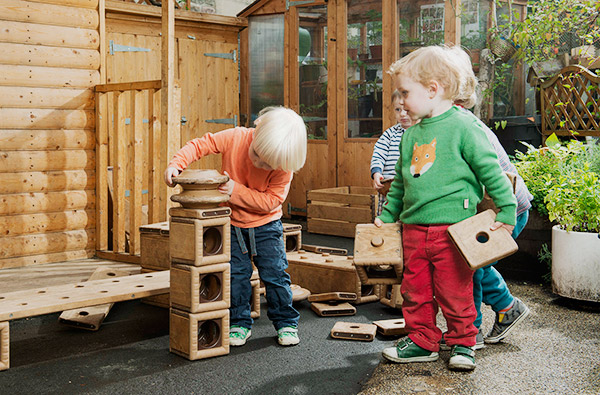 The idea of physical activity as fostering all-round development is a relatively new concept. Historically physical play was regarded as just something to allow young children to “let off steam” so that then they could then sit down and concentrate on real learning activities (Spencer, cited in Manning-Morton and Thorp 2003). Parents and practitioners may still encounter early years settings where this belief holds sway, even though it is not part of written policy, nor found in government guidance such as the EYFS (DFE 2014a) in the UK or the Pre-Birth to Three: Positive Outcomes for Scotland’s Children and Families (Education Scotland 2010). But the tell-tale signs can be detected in everyday practices. For example, outdoor play may be offered for only a few short periods and planning and resourcing of the outdoor provision given far less attention. Practitioners’ comments such as, “Come and finish your work and then you can go out and play” also reveal that less value is placed on running, climbing and free movement than activities for which the child must be seated.

A setting that really values physical play will not only provide rich opportunities for this to happen outdoors but will also ensure that slides, climbing frames, tunnels, dens and large empty boxes and crates will be available indoors too. In the UK and some other countries, adverse weather may deter practitioners from offering as much outdoor play as compared to Australia, for example. However, providing suitable clothing will enable the 2-year-old to enjoy the sensory experiences of rain drops, puddles, wind and snow. Many settings in the UK are now adopting a “Forest school” approach. Samuel (2012) describes how they: “seek to encourage, motivate, engage and inspire children through positive outdoor experiences. Forest schools are closely entwined with the concepts of free flow play and learning from play.” In a Forest School approach, children learn through being encouraged to be independent, free to follow their own interests, and to engage in play that includes risk taking. A wealth of different activities can take place outside that promote sustained concentration and deep involvement, thereby supporting all-round development (Samuel 2012).

Other practitioners are introducing “Developmental Movement Play” into their settings (Greenland 2009). Practitioners and students of early childhood will be familiar with fostering the development of the five main senses. However, there are also the vestibular and proprioceptive senses to be mindful of. As LeVoguer and Pasch (2014; 100) point out: “the vestibular sense is a balance mechanism…dedicated to posture, equilibrium, muscle tone and spatial orientation”. Goddard-Blythe (2004) asserts that providing rich opportunities for movement alongside good nutrition supports children’s learning and aids them in becoming well balanced in all aspects of development. As Greenland (2005) found, without a strong movement vocabulary children may have limited expressive ability, inappropriate reactions to the environment and an inability to integrate cognitive skills with motor and sensory skills; this adversely affects how fluidly they can think.

Developmental Movement Play emphasises two important aspects of movement: opportunities for children to revel in child-led, free-flow spontaneous movement play, and attention to specific early movement patterns and activities that appear to prompt neurological development. This play is concerned with facilitating the following ways of moving: floor play on backs and tummies; belly crawling; crawling; pulling, pushing, stretching, hand buffeting; and spinning, tipping and tilting (Greenland 2009). Each of these is identified as having neurological and other developmental benefits. For example, belly crawling is beneficial for stimulating horizontal eye tracking and the nerves that pull the eyes into alignment (Greenland 2009). It also strengthens the arches in the feet and promotes stability of the neck, spine and hips and gives rise to a feeling of “vertical through-ness which helps the child to feel grounded” (Pasch 2013: 3). Crawling promotes eye-hand coordination, helps shoulder, hip and wrist rotation and supports the development of connections between the brain’s two hemispheres, whose functions include memory retrieval, sorting and sequencing (Pasch 2013).

Therefore, floor play on backs and on tummies seems to be of fundamental importance and advantageous if embedded in continuous provision. Pedagogically, movement play incorporates theories of sensory integration with dance theories (Sherborne 1990) and free-flow play (Bruce 2001). It sees movement as our first language and as a direct way of communicating throughout the lifespan (Fraleigh 1999; LaBarre 2001; Bloom 2006), all of which add weight to the argument for active exploration and against expecting young children to sit at activities in order for valuable learning to take place.

DFE (Department for Education) (2014a) Statutory Framework for the Early Years Foundation Stage. Setting the Standards for Learning, Development and Care for Children from Birth to Five. Available at: https://www.gov.uk/government/uploads/system/uploads/attachment_data/file/335504/EYFS_framework_from_1_September_2014__with_clarification_note.pdf (accessed 04/08/2014).

Pasch, J. (2013) Emotion, mastery and meaning – getting connected in the early years. Paper presented at the Expect the Best Conference, June, 2013.

The complete book, Two-year-olds in early years settings – Journeys of Discovery is available for purchase.

Julia’s career in the early childhood field has included roles as a practitioner (nursery nurse), manager, adviser and inspector across a range of settings for children aged 0–7 years and also as a senior lecturer in Early Childhood Studies.

ABOUT THE AUTHOR
Maggie Thorp

Maggie Thorp has extensive experience of working with children from birth to three and managing community and local authority nurseries.

More from Physical Development
Video
Welly storage
Our new welly storage solutions allow children to put their wellies away independently. Space efficient and easy to clean, these welly racks will help keep the entrance to your nursery welcoming.
Article
Supporting sensory development
Our world has changed dramatically in the past several months. Scheduled activities outside the home are no longer driving our days. The sudden lack of social engagements and predictable routines has left many of us struggling, along with…
Article
A model for living
In this final article of our Model for living series we focus on learning, a much debated aspect of life in the early years. What are we doing to give children access to quality learning experiences, ensuring that they make…
Article
Woodwork: irresistible learning
The last few years have seen a surge of interest in woodworking in early years education. Some settings are starting from scratch, while for others it’s a case of dusting down the workbench and digging out the tools after many years of…
See all Physical Development articles