A creative way to manage behaviour

Jedekai was lying on his back in the middle of his group, giggling with laughter. Every so often, he covered his eyes – as if the sight of the filmy, sparkling fabric was too much to take in all at once. He rocked from side to side, completely engaged with the sight above him as we floated the sari up and down. This was the first time throughout the session that the other teachers and I had heard him make a sound. It was one of those ‘golden’ moments, a reminder of why I do this work.

‘This work’ – movement, drama and storytelling – is one of the richest sources for creative behaviour management that I know. Taking a creative approach to managing behaviour is an attitude, a willingness to engage on an emotional level. Without relinquishing any authority or compassion, it is possible to enter into a relationship with a sense of fun and exploration; to view a child or group of children from a different perspective (‘what are they saying with this movement, this game, these sounds?); to stand beside them and see their point of view. 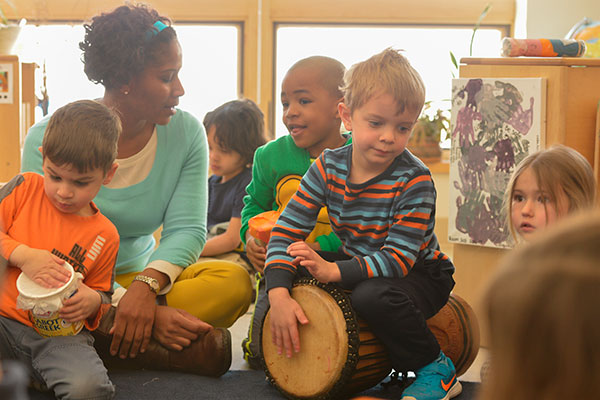 Another skill is to ignore ‘unwanted’ behaviour as much as possible and to involve co-workers, parents and carers in that struggle. A new approach to language is clearly helpful: ‘Jake, walk on the pavement please!’ perhaps, rather than ‘Jake! Get out of the road!’

In the day-to-day management of behaviour there are other factors to consider, which include:

When Jedekai lay there watching the pink sari float up and down, giggling with excitement, it got me thinking about all the different elements which had gone into making this a positive experience, for all of us.

Jedekai is four years old and has recently arrived in the country. He is profoundly deaf, is able to walk slowly, but cannot jump or run. He could often be seen lying down within a group of children but not part of it, playing at floor level. As far as the setting knew, there had been little or no educational or language support.

The starting point for my relationship with this little boy was my treasure baskets and the work of Elinor Goldschmied. What could I bring to the session that would really include him, help him join with the others and provide him with a rich sensory experience? 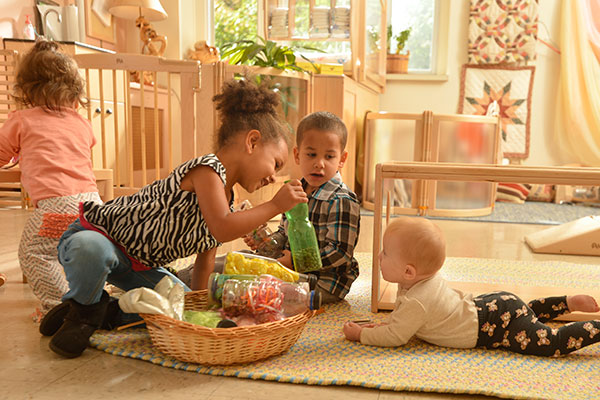 Each week I would bring something new. A length of thick, metal chain and a feather scarf, satin ribbon and a thick rope, heavy pebbles and a beautiful shell. As the children passed the chain slowly around the group, they had the experience of its heaviness, coldness, and change in temperature, and they were quite literally joined together – a symbol of what was slowly beginning to happen in the group.

It opened interesting conversations such as: Why is Jedekai allowed to keep holding something for longer? What is different about him? What might it be like not to hear sounds? Why does Jedekai rush to the tape machine and put his hand and face on top? How can we show Jedekai what is happening next in the story, if he can’t hear? These were valid questions and important in the children’s developing relationships. We were all in this together – the message being that it is alright to talk about differences because differences are OK.

The structure of a creative movement and drama session is crucial: there must be a clear beginning and focus, a middle or ‘main event’ and an ending. Some children may think of it as ‘having fun dancing’, but there are important transitions and symbolic meaning within a well-planned session. Ideas and clues are picked up from the children and nursery staff, and woven together into an experiential story with real meaning.

In response to Jedekai, we slowed down and took more time to experience special objects. This was of benefit to us all, and transitions within the session were made with care and visual clues. When we moved from the beginning of the session (which included exploring natural objects, singing and moving to greeting songs), I would use my puppet, Uncle Roger, to show the children what would happen next.

We might move on to a small bag full of colourful ribbons or a woven basket, with lid, hiding coloured squares of cloth. The basket would be passed around for the children to stroke and touch. There is always the excitement of anticipation, and reassurance that the same thing happens each time even if there are different materials to work with. For children who are anxious or disorientated it provides comfort in the very bones of the session. 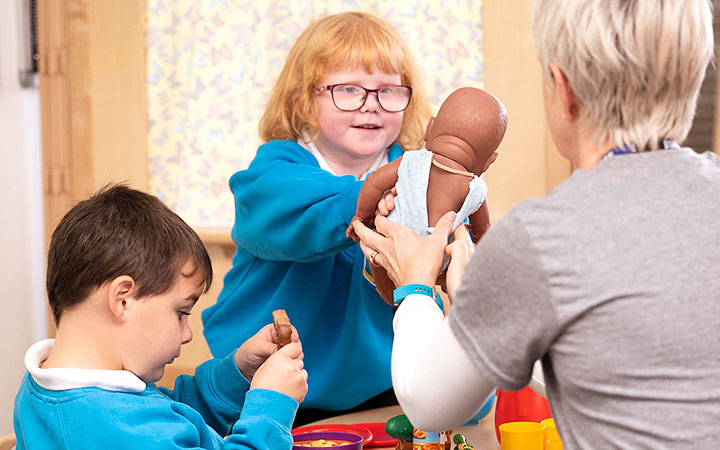 And, of course, there is the wonder of working with a puppet. Uncle Roger is a scruffy, one-eyed, long-tailed raccoon. He can go places, emotionally, that I can’t go – the children can immediately identify with someone ‘small’ and cheeky, who has difficulty doing up his buttons, putting his socks on, or having to wear a sun hat in the summer. He often introduces the ‘main event’ via a storybook, a hand-written letter or special object.

He is always asleep – we have to wake him with magic or a song. The children listen every time with great attention, as I tell the story of how Roger lost his eye, how it fell and rolled down the road, out of sight, never to be found. He cries at this point, and the children rush to hug and kiss him, offering comfort. Roger teaches the children about compassion, love, excitement, gentleness, sadness, anger and fear. He helps them develop a vocabulary to describe feelings and experiences. He helps them to create their own solutions to problems and difficulties. He can make a relationship without language or words. Sometimes, even though I have a plan for the session, we may end up in a different direction, depending on input from the children.

Within the session children are given manageable responsibilities. From stroking the person next to them in a hello song to taking turns with an instrument, handing out ribbons and even helping ‘rescue’ their friend (as part of the story) who has fallen into the river.

So when Jedekai stood, physically supported by his key worker, in the very centre of his group collecting the coloured cloths into the basket, he was truly ‘in the middle’ and his feelings of obvious pleasure were shared by us all.

To support the work, this particular setting made a book of photographs of the children looking at special objects, moving and dancing and talking with Uncle Roger. They also made a large wall display.

So what else would have been useful? Some resource bags available for children and families to borrow, with dancing ribbons and cloths and a book of songs with accompanying CD; a small puppet to look after and a disposable camera and postcards for families to record experiences. It would have been marvellous, too, if Jedekai’s carer had been invited to join a session along with other parents and carers.

Young children are learning about boundaries and containment. They need to test the limits to find out where and who they are. They are learning how to inhibit themselves and delay gratification. It can be challenging joining a group of children from different backgrounds and experiences with new rules and routines, particularly if you are an only child, not used to sharing toys or adults.

When children are granted their wishes in fantasy and story, they are given the opportunity to be powerful, larger than life, and to process their fears and desires. Along with us, they can take giant pieces of chocolate cake and fizzy lemonade in their pockets to eat on their way up the beanstalk. They can be monsters, giants, snakes and tigers, beautiful princesses – and then fly back to nursery on the back of a fierce dragon. Within this, they are contained and there are clear limits and boundaries.

One child within a creative storytelling was clearly beside herself: she was quite literally leaping with excitement. Matching her energy, I started with some fast hello songs with lots of actions, and we ‘put our big shouts into our pockets’ for later. Well-intentioned staff reminded her ‘don’t shout, don’t jump, listen!’

While the rest of the group ‘travelled’ on our magic carpet to the jungle, she hid inside the toy house – I think, to have the experience of being contained because she was finding it too difficult to contain herself. She joined us again later, but not without a lot of ‘Come on, you’re meant to be joining in!’ This was distracting and the children who were participating were ignored.

Towards the end, I told the children, ‘It’s time to lie down under the clouds’. I knew the child would be unable to lie still for longer than a few seconds, so quickly I handed her Uncle Roger, saying, ‘Could you hold him for me? He sometimes gets frightened at this bit and needs a cuddle with someone who can be very quiet and still. That would be wonderful.’

She lay down for seven and a half minutes and I was able to congratulate her on how well she had done. She was having difficulty holding onto herself, so I needed to give her something to hold on to.

As early years professionals, it is part of our job to manage behaviour, and to keep children (and ourselves) safe. Managing behaviour creatively is, on the whole, a series of skills, which can be learnt and practised. This is tempered by experience and personal history. By injecting a sense of fun and a positive attitude into a situation, the learning is likely to be richer and more satisfying for all concerned.

Anni McTavish is an early years and creative arts trainer.

This article first appeared in Early Education, the journal of the British Association for Early Childhood Education, issue 48 (spring 2006).