The importance of constructive play

One of my favourite activities as a young child growing up on a farm in the beautiful border country between England and Wales was to go outside after the frequent heavy rains we often experienced (or even while it was raining) to dig and build little ditches, channels, aqueducts, tunnels, diversions, and dams for all the runoff. I also loved creating fantastic marble shoots with my peers at school using several sets of unit blocks. I remember some of these block creations were so high that they touched the classroom ceiling! Both these activities involved constructive play. In this article I argue that, while constructive play is often viewed as secondary to both physical and symbolic/fantasy play, it is critically important for young children, and should be encouraged and supported both in the classroom and on the playground.

According to Piaget, children engage in types of play that reflect their level of cognitive development: functional play, constructive play, symbolic/fantasy play, and games with rules (Johnson, Christie & Wardle 2005).

Piaget also viewed these forms of play as progressive, or cumulative, beginning with functional play (i.e. an infant playing with a rattle) and progressing to games with rules. But, because a game with rules requires someone to make sure players adhere to these rules – usually an adult – it is often not included within the framework of free play. And, while functional play is the kind of play encouraged in most outdoor playgrounds (swinging, sliding, riding tricycles, running, and climbing), symbolic/fantasy play is viewed by many experts as the highest level of play in the preschool and kindergarten years (Leong & Bodrova 2015). Early childhood scholars believe that symbolic/fantasy play develops children’s social skills, basic mathematical abilities, early literacy concepts, and behavioural self-regulation. Unfortunately some have even called it mature play (Leong & Bodrova, 2015). Thus constructive play is often left out of the discussion regarding the critical importance of play, or is simply viewed as a bridge between functional play and the supposedly more desirable and sophisticated symbolic/fantasy play.

Constructive play is what young children do

With the current focus on early childhood standards, assessment of young children’s progress, and early childhood academic activities, early childhood educators continually have to justify the use of play in the curriculum. Often this justification is that play prepares children for later academic, social, and emotional successes (Leong & Bodrova 2015). But, while constructive play teaches children to be flexible thinkers (Bruner 1972), and develops a sense of control and self-esteem by encouraging children to control their environment (Chaille 2008), I believe the main value of constructive play is that it enables children to be children: to do what children need to do and want to do!

I often enjoy playing with my 4-year-old grandson, Isaac. When he visits us at our home, he loves to play with the set of unit blocks that we acquired for our own children. He loves to make patterns on the floor, matching up different size blocks, and placing blocks of the same shape and size together. But recently everything changed: he decided his goal now was to place all the blocks on end, and to see how high he could build them! He even tried constructing these structures on a gymnastics mat (which happened to be on the floor) until he discovered that this did not provide the needed stability.

Isaac’s goal had changed because his view of the world had changed as a result of his cognitive development. Our understanding of constructive play comes from the constructivist view of development and learning (Chaille 2008). This approach to early childhood education is about responding to children who are, by nature, exploring, discovering, and theory building in everything they do. It is a theory that believes children construct knowledge through interactions between their own ideas and experiences in the social and physical world. Thus, learning from a constructivist perspective is intrinsic, because children continually try to make sense of their world, which is what Isaac was doing. 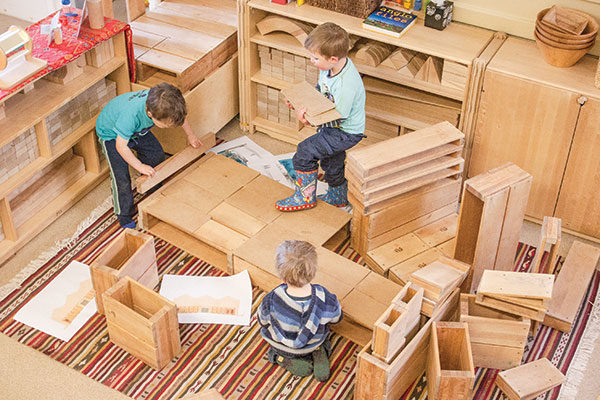 The most important thing in encouraging constructive play for young children is to understand the value of this kind of play, in and of itself, and not to view it as preparation for future academic success and development, or as a bridge to symbolic/fantasy play. Children should be encouraged and supported to fully enjoy, explore, and appreciate constructive play. Further, enough time every day needs to be provided for all kinds of play, and constructive play should be encouraged inside, in transition areas (i.e. porches or decks), and on the playground. This begins by providing a vast array of stimulating materials such as: 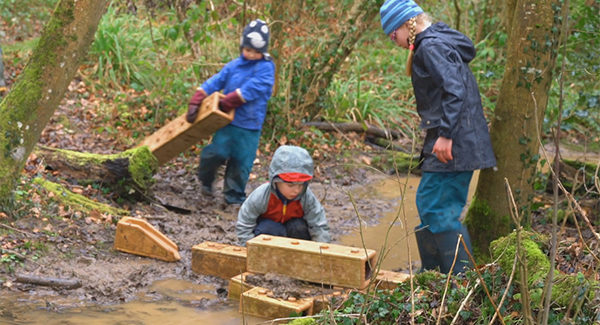 Well-designed water play areas and sandboxes encourage constructive play because so much can be done using these very flexible materials (Ihn 1998). A hardtop area within the playground or transition area between the classroom and playground encourages play with unit and hollow blocks, water tables, woodwork benches, art easels and paints, and other traditional classroom materials. A large garden also encourages a variety of constructive play.

However, children also need to be encouraged to use traditional classroom materials and equipment in novel and innovative ways outside, such as painting on the sidewalk or fence, making garden signs and building birdhouses on the workbench, and building higher and bigger with blocks. In general, outdoor play is louder, takes up more space, uses more – and often different – materials, and is messier than indoor play(Johnson, Christie & Wardle 2005).

Constructive play is what young children do naturally. While other forms of play can be justified as preparing children for later academic and life successes, constructive play should be encouraged and supported because it lets children simply be children. This, many believe, is the best possible preparation for later achievements. Providing adequate time each day for play, and continually changing, combining, and adding new and more complex materials, both indoors and on the playground, are the best ways to support constructive play.

ABOUT THE AUTHOR
Dr. Francis Wardle

Francis Wardle grew up in the UK and went on to earn his PhD in child development and early education from the University of Kansas. He has taught preschool, kindergarten, and grades 1–4, and has been a Head Start volunteer, education coordinator, director, and national reviewer. His own constructive outlet is designing and building playgrounds in this country and Brazil. Currently he teaches for the University of Phoenix (School of Advanced Studies) and Red Rocks Community College.

More from Block play
Article
Froebel’s gifts and block play today
When Friedrich Froebel gave his cousin a set of wooden blocks for her two young sons as a present and asked her to observe how they played with them, he gave us two gifts in one – a practical resource designed for children’s learning and…
Article
Playing and learning with blocks
A lot of emphasis is put on reading, writing and storytelling and maths, but actually, if you can’t be creative, how can you solve problems? That’s what the blocks help you to do – you turn a problem over, not only in your mind, but you…
Article
Open-ended play at home!
As the COVID-19 pandemic impacts almost every area of our lives, many of us find ourselves in unique new positions. For example, unable to send our children to nursery, we must now occupy and teach them at home. How can young children’s…
Article
Block play and spatial skills
Many early childhood experts have documented the value of blocks for children’s learning, offering evidence that when children are given time to plan, construct, and create with blocks, they develop socially, emotionally,…
See all Block play articles
Explore Block play Products
Explore Block play