It's time to get blocks back into the spotlight!

As I load up my trunk with containers of blocks and found materials in preparation for yet another training for early childhood teachers, I tell myself that I am getting too old for all this schlepping. Just as quickly as the thought crosses my mind, a surge of excitement and energy pulses through me. After six years of facilitating professional development sessions on the exploration of materials with teachers, I am more convinced than ever that blocks are one of the most essential materials for the early childhood classroom. 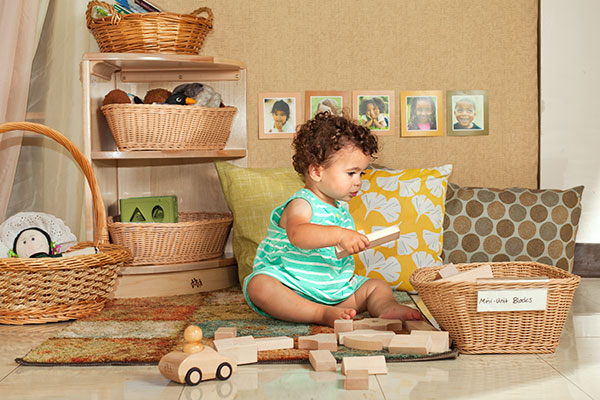 “Why then, in the name of school readiness, is block play marginalised, if not disappearing from children’s classrooms?” asks Margie Carter in the foreword to Creative Block Play (Hansel 2017). Increasingly, young children today are sitting in front of two-dimensional screens and worksheets instead of having playful, hands-on, sensory experiences with three-dimensional objects (Hansel 2015). Why is this a problem and what is it about blocks, and wooden unit blocks in particular, that make them such an important material for young children?

The science of block play, maths and shapes

Many early childhood experts, including Friedrich Froebel, Caroline Pratt, Harriet Johnson, Elizabeth Hirsch, and Mary Jo Pollman, have documented the value of blocks for children’s learning, offering evidence that when children are given time to plan, construct, and create with blocks, they develop socially, emotionally, cognitively, and physically (Hansel 2017, 5). This evidence is now being confirmed by scientists using new technologies to see the inner workings of the brain.

According to Dr. Jo Boaler, a professor of mathematics education at Stanford University, brain research now shows that as you learn something deeply, the synaptic activity in the brain will create lasting connections (unlike when you learn something in a superficial way) and that “synapses fire when we have conversations, play games, or build with toys” (Boaler 2016, 1). In other words, building with blocks to experience their three-dimensional properties will create a lasting pathway in the brain and a deeper understanding of shape, whereas identifying three dimensional shapes on a workbook page is unlikely to build understanding of shape and three-dimensionality. 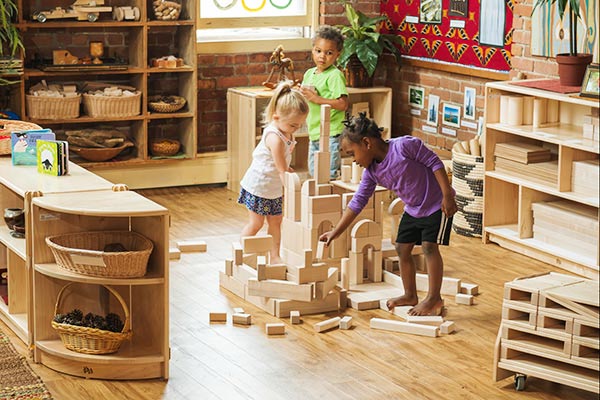 The importance of spatial skills

In addition, there is exciting new evidence linking good spatial skills and children’s future achievement in all the STEM (Science, Technology, Engineering and Mathematics) subjects (Lubinski 2013; Newcombe 2010). “Despite the evidence, however, the importance of spatial skills is often overlooked as a key feature of STEM education. This frequent neglect of spatial development creates an additional barrier to children’s STEM learning” (Berkowicz and Myers 2017) and reminds those of us in early childhood education that we must start paying attention to developing spatial skills. While laying the foundation in the STEM subjects is important, especially for underserved populations and those underrepresented in the STEM fields, including girls, spatial skills are critical in many other fields, as well as in everyday life, such as when we load up a trunk with blocks and navigate our way to a new location for the first time.

The great news is that spatial skills can be improved with practice. While not all experts agree on a common definition of what spatial skills are (Hansel 2017, 20), most agree that the use of manipulatives helps children make sense of abstract concepts. Wooden unit blocks are a perfect example of a child-friendly manipulative that can be used to strengthen spatial skills. Think about how a child recreates a zoo with blocks while closely referring to a map of the zoo and carefully ensuring that each zoo animal fits into the enclosures she has made to scale.

Start with giving children ample time for open-ended exploration with blocks, but don’t stop there. If you really want to see children’s spatial thinking flourish, target the spatial skills in the table below and offer block activities that encourage spatial language and challenging tasks! Now the spotlight is on you!

ABOUT THE AUTHOR
Rosanne Regan Hansel

Rosanne Regan Hansel was most recently an Education Program Development Specialist for the NJ Department of Education and is now a consultant for 3D Childhood. She is author of Creative Block Play: A Comprehensive Guide to Learning through Building and a contributing author to Big Questions for Young Minds: Extending Children’s Thinking (Strasser & Mufson Bresson, 2017). Rosanne holds a BS in Art Education from Penn State and an MS Ed in Early Childhood Leadership from Bank Street College of Education. She was formerly the Early Childhood Specialist for the National Science Foundation’s Maths Science Partnership at Rutgers University and an administrator and teacher in a variety of early childhood and elementary settings. Rosanne has written performing arts and approaches to learning standards for preschool, co-authored the New Jersey Kindergarten Guidelines, and currently facilitates professional development on the kindergarten guidelines and early childhood science, maths, art, creativity, and STEAM.

More from Block play
Training resource
Open-ended play
When free to experiment with the simplest materials, children find ways to express and develop their thoughts in imaginative play.
Article
Block play and child development
There are three main concepts that a child develops when building with blocks. The first one is stacking, then we’ve got bridging. Finally, we begin to create enclosures.
Article
Froebel’s gifts and block play today
When Friedrich Froebel gave his cousin a set of wooden blocks for her two young sons as a present and asked her to observe how they played with them, he gave us two gifts in one – a practical resource designed for children’s learning and…
Article
The importance of play for learning
Childhood is a time for, well, childhood! It’s not a preparation for school or adulthood. It’s a time for allowing children to go at their own pace, giving them the time they need to explore, manipulate, discover, and practise newly…
See all Block play articles
Explore Block play Products
Explore Block play