More than bouncing back

Resiliency reminds me of the pop-up doll I had as a child. It was egg-shaped, full of air, and had a rounded bottom that was weighted. It was as large as I was. I could push it over and it would always pop back up again. I loved that doll and the message it conveyed: when life knocks you down, get back up again.

But the full experience of resiliency is more complex than simply popping up again and returning to one’s former state. Resiliency allows us to face life’s obstacles and transform them into stepping stones for growth and transformation.

We are capable of overcoming problems, tragedies, and even traumas; but it takes time and often hard work to climb out of the pit of despair and rise again. Often, we need a helping hand. In the end, the image of the pop-up doll is replaced by the image of the phoenix which rises out of its own ashes.

The capacity for being resilient abides in each of us but whether it comes to the fore depends on a child’s own nature, their upbringing, and education. In the United States, there is concern that today’s children are growing up without enough resiliency to meet the demands that will face them in life. Some children receive too little nurture, and struggle to find their footing in life. Others have been cosseted and over-protected. They have been praised and rewarded for the most common accomplishments, and protected from risk and failure. There is concern that they will not have the grit and determination to survive life’s challenges or the inner strength to transform these challenges into opportunities for growth.

Out of these concerns comes a new image. Instead of “helicopter parents,” who swoop in at the slightest hint of a problem for their children, we have “hummingbird parenting,” in which parents stay nearby but only swoop in when really needed. They let their children face as much risk as the children can handle. There is yet another stage to aspire toward – to prepare children so that they can range as freely as possible given their age and circumstances. Such children are generally very confident and resilient. Lenore Skenazy’s book and website on free range kids is very helpful in describing this approach to resiliency. 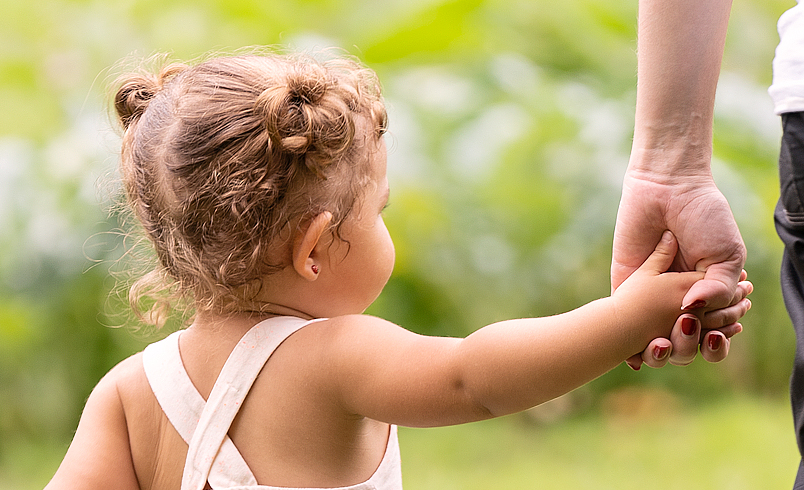 What research tells us about resiliency

A central question in understanding resiliency is why some children manage to succeed in life, even against great odds, while others do not. An important study of resiliency took place on the island of Kauai in Hawaii. Researcher Emmy Werner and Ruth Smith followed a cohort of nearly 700 children from the time they were born in 1955 until they turned 40.

About a third of the children were from difficult backgrounds with one or more risk factors in place. Yet about a third of these at-risk children showed signs of having grown into caring, competent, and confident adults. How did they do it? The researchers identified three clusters of “protective factors” that helped the individuals overcome their difficult beginnings. These same factors are important for all children, not only those with known risk factors. The following descriptions and quotes are from a paper about the study entitled “Resilience and Recovery: Findings from the Kauai Longitudinal Study.”

1. Protective factors within the individual

The children in the study who were later very resilient seemed blessed with many fine qualities even as infants and toddlers. They were sociable and elicited positive responses from others. Also, their language and motor development tended to be well developed. They had talents which helped them become self-confident. They willingly assisted others who needed help. By late adolescence, they “had developed a belief in their own effectiveness and a conviction that the problems they confronted could be overcome by their own actions.”

Not all children naturally exude such confidence and endearing ways. I remember the challenge of cultivating positive feelings for a boy in my preschool class who was consistently negative toward me and everyone else. Although his mood had not completely lifted by the end of the year, I felt we had come a long way together. It was all captured beautifully in a drawing he made for me in which there was a boy with a very happy smiley face, but down the side of the picture he had written “No, no, no,” about five times.

2. Protective factors in the family

What was especially important for the children who succeeded against the odds was developing a close bond “with at least one competent, emotionally stable person who was sensitive to their needs.” The person might be a parent, grandparent, older sibling, aunt, or uncle. The resilient children seemed to be especially capable of “recruiting” alternative parent-figures when their own parents could not play this vital role.

When a family is under stress, life becomes very difficult for the parent or adult who provides primary emotional support for the child. As teachers and caregivers we can lend support to the adult as well as the child, listening well and providing help rather than harsh judgements.

3. Protective factors in the community

The Hawaii study found that resilient youngsters turned to elders and peers in their community for emotional support and sought their counsel in times of crisis. They might turn to a favourite teacher or a neighbour, the parents of a friend, or a religious leader.

Psychologists have told me that when they are treating an adult with emotional problems, the person often talks about an individual who helped them in their childhood. It might be a teacher or another who cared deeply for him or her. The memory of that person becomes a lifeline back to health. Every teacher can be that person for a child. 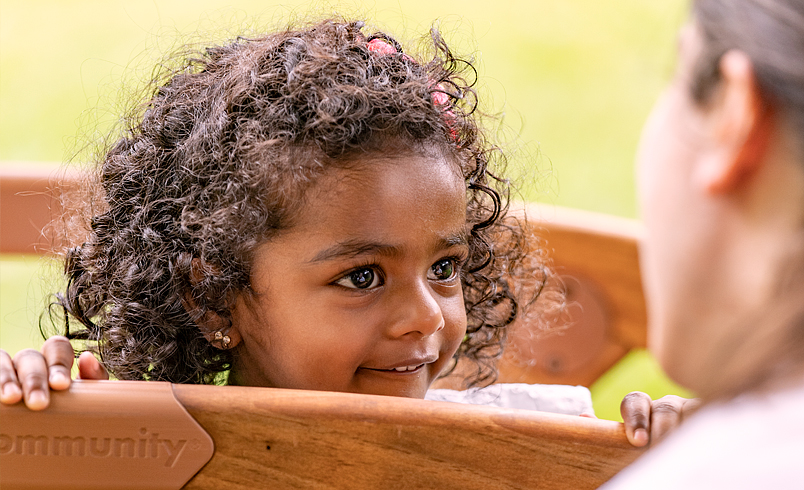 The role of educators in building resilience

There are many ways that teachers and care givers can lay secure foundations under children’s feet so that they can rise again when life becomes difficult. Here are a few ways that have stood out in my own work with children, but there are many more. It is worth reflecting on which of your practices best support children’s resiliency and how you can integrate them even more strongly in your work.

Building caring relationships with the children

First and foremost, adults can cultivate warm, loving relationships with children. Such care becomes a protective layer around the child which provides strength and nourishment. It reassures children that they are not alone. There are people in this world, in addition to their family, who care for them, love them, and are present in times of need.

Attunement to the natural world

When children are at home in nature, they are generally at home with life itself and all of its ups and downs. They see that nature is resilient and recovers from disasters like fire and floods, hurricanes and earthquakes, and this is reassuring. We lay a strong foundation when we celebrate the seasons through songs, stories, foods, arts, and crafts. Children learn that change is a natural part of life. They live deeply in the birth of spring, the expansiveness of summer, the contraction of fall, and the death of winter. They experience the cycle again and again and are reassured that life goes on even when the world seems dead and frozen. While growing up in places with four distinct seasons makes this experience very visible, even in places on the Equator people celebrate the cycle of the year as different plants blossom and bear fruit all through the year. Throughout the ages human beings have understood that life is cyclical and never ends.

The power of fairy tales

Fairy tales contain images that are very meaningful to children, especially in times of trouble. One child in my class loved the story of Cinderella and played it out for months after her own mother died. She seemed reassured that even after the death of her mother Cinderella was well guarded by loving beings, and she was able to overcome great difficulties. In fairy tales there are wonderful helpers who help break the enchantments and free the prince or princess. They may be people, animals, or seven dwarves. These helpers awaken a deep trust that when life is difficult – even impossibly so – unexpected aid is available. There is much that we can do for ourselves, but to be fully resilient and experience all the growth and transformation possible, we frequently need the help of others. 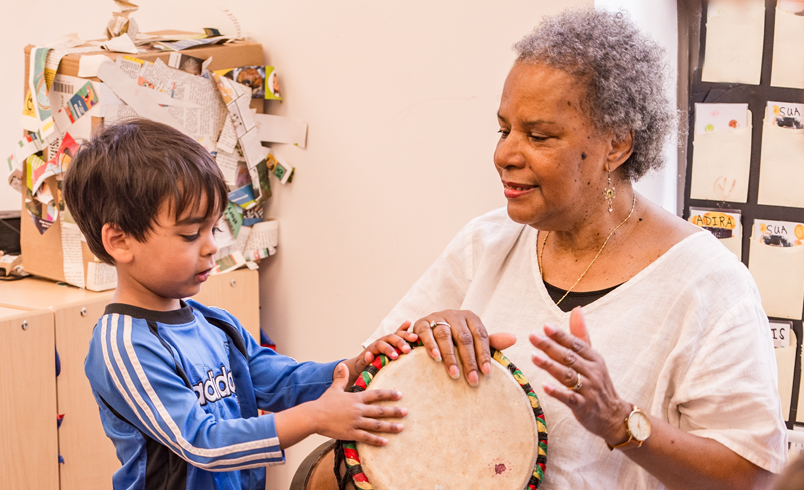 There is nothing sadder than to see an adult hit by adversity who is unable to rise above it. In contrast, our own spirit is strengthened when we hear about or meet another human being who has found a way not only to bounce back from difficult times, but to grow through them.

As teachers and care givers we can do our part in preparing children for a life of such resiliency. We can surround children with love and warmth that does not smother them but gives them a strong foundation for meeting life’s obstacles. We can be an example of an adult who meets adversity with courage and hope. We can cultivate a love of nature and a trust in its cycles of death and rebirth. And we can foster a sense of the sacred and a gratitude for the many forms of help that come our way when help is needed. As with so many aspects of healthy development, children have an innate capacity to be resilient, but they need the help of caring adults to bring it to fruition.

ABOUT THE AUTHOR
Joan Almon

Joan Almon (1944–2019) was a Waldorf early childhood educator in the USA for nearly thirty years and then co-founded the Alliance for Childhood to advocate for the needs of all children. Her concern for childhood on the global level never waned, and she worked to highlight the needs of children worldwide and the wonderful programs serving children. At the end of her life, Joan was working on a book to be called, Learning with Children.

More from Advocating to meet children’s needs
Article
Learning from intergenerational practice
Pixie sits happily with Irene to enjoy lunch together. They are in their own world, absorbed by each other and beautifully attuned – a partnership of equals. Pixie is 14 months old and Irene 97 years young, born nearly a century apart.
Article
Ron’s legacy
Ron was our company representative for decades and his sales techniques were unusual to say the least. He cared deeply about children and the importance of a carefree and joyous childhood. Ron was passionate about kids having the best…
Article
Get kids moving
Play is the way kids wring out their brains, for resetting and relaxing their focus so their brains are more alert when it is time to go back to the desk. It is play that helps kids build strengths and motor patterns and that helps develop…
Article
Promoting play in a time of virtual learning
The unprecedented transition from classrooms to virtual learning in the last months can leave us feeling hopeless and powerless, or we can choose to use the moment as a catalyst to transform early childhood education. It is time to support…
See all Advocating to meet children’s needs articles