As every teacher knows, it is very frustrating to have children with difficult behaviours in the group. They embarrass us in front of colleagues and parents. They spoil our plans. We resent that they take our attention away from other children, and it can take much effort making other children safe from the aggressor. On a bad day, it is easy to blame the victim. 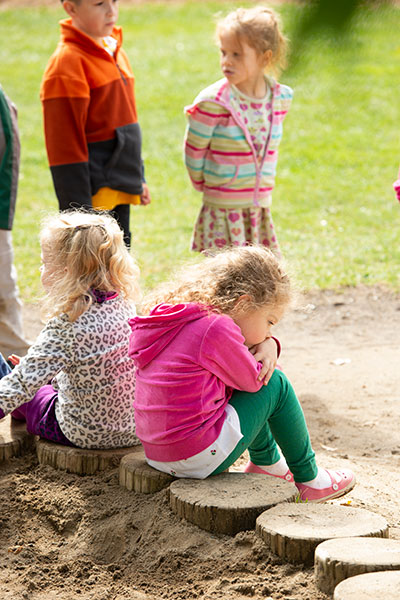 A child’s difficult behaviours are really calls for help. We must ask ourselves: What is going on? Why is this child motivated to act in this way? How does the situation look from the child’s point of view? What are her goals with this behaviour? Sometimes adults misread the child’s goals because we project our own adult thinking onto the situation. For instance, toddlers don’t lay traps to purposely embarrass adults. Infants don’t purposely cry in the middle of the night to annoy parents. Young children act out of more immediate needs.

When analysing the child’s motivation and how to respond, it can be helpful to consider some developmental issues that influence how children act.

Children are vulnerable and dependent! They learn that they depend on particular adults to get their needs met. Power becomes an issue, figuring out how to get the adults to “hop to.” Infants learn to cry when they are uncomfortable, hungry, or bored; and, like magic, someone appears. Toddlers learn to whine. Two-year-olds learn how to throw tantrums. Three-year-olds learn how to manipulate. If a child’s needs are met with relative consistency, negative behaviours often subside and the child can relax and enjoy the world. When children have not been able to trust the important adults in their lives or when they feel betrayed, they become more fearful and clinging. 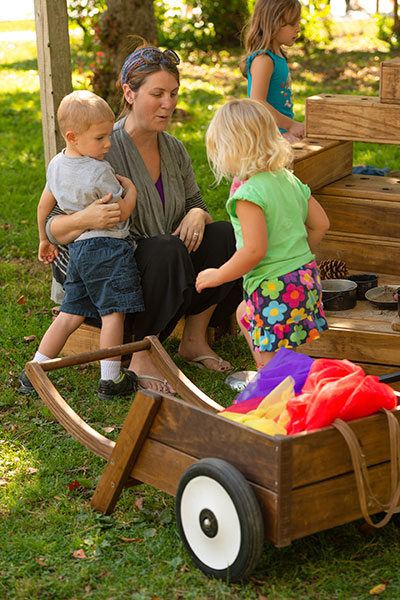 Young preschoolers have not had enough time on the planet to totally comprehend that other people are “real” and have feelings independent of their own feelings. In fact, they assume that everyone else has the same perceptions and feelings that they do … that if they want the red ball, everyone wants them to have that ball. That is why they are so impatient when another child doesn’t hand a toy over immediately, and why they work so hard to correct the situation if they find that they are not the centre of attention. Gradually growing out of their egocentrism and learning to consider the point of view of others is one of the major social tasks of the preschool years.

Another aspect of egocentric thinking is that the child feels that all events happen for or because of her. We are amused when a child tells a father he can turn the ocean waves off now because she wants to go home. But when a child thinks she is the cause of her father’s drinking, or parents’ fighting, or grandmother’s death, difficulties occur. Feelings of guilt may cause the child to act in ways that confirm her low opinion of herself.

It’s difficult for preschoolers to consider that someone or something can be both good and bad at the same time. There are no “greys” in their justice system. Someone is all good or all bad. Classmate Melissa who pulls hair is a “bad girl.” Uncle Jonathan who is fun to be with and gives mommy money cannot possibly be “bad” because he sells drugs.

Anchored in the here and now

The child considers a situation only from what she can perceive at the moment. She has difficulty thinking about events that led up to something, or what might happen in the future because of an action. The sequence of cause and effect events is too difficult to project - it requires abstract thinking and the child is still in a very concrete mode. The child has to be able to perceive something with his senses to understand it. Therefore, responses to behaviour situations should be immediate. Waiting until the end of the day to discuss a problem with a child works less well.

The child is not skilled at hypothetical thinking. For instance, the common adult response to a child’s aggression - “How would you like it if someone did that to you?” - is usually completely ineffective. The child doesn’t “get it.” In fact, it is usually taken as a threat. When a child throws sand and hurts another child and the teacher says, “How would you like it if someone threw sand in your face?” the child hears it as an offer (Would you like me to throw sand in your face?). That typically causes fear and alienation rather than empathy.

The child has a difficult time sorting out fantasy and reality. Images on television, even cartoons, seem real to the child. Bodies spring back to life. Punches don’t hurt. Sometimes the child is surprised at the effect of his actions.

The child also may believe that wishing something makes it come true. This doesn’t usually cause problems until the child wishes for something negative, such as wanting a bad thing to happen to a sibling. If a tragedy does occur, then the child can be overwhelmed by guilt.

A child’s difficult behaviours may also be a response to some trauma or crisis in their lives. Egocentrism can cause a child to think she caused the bad thing to happen - mommy’s drinking, grandma’s death, even the earthquake that destroyed the house! The child’s faulty logic goes something like this: When I’m bad, something bad happens to me … I get punished. Hmmm … something bad happened: daddy left. Therefore, I must have been bad. Subsequent feelings of guilt can cause the child to have lowered self-esteem. This shows up in a number of ways. The child is more easily frustrated, flies off the handle more quickly, whines and cries more.

A child’s self-esteem often suffers when there is any family trauma going on, even when the event has nothing to do with the child. For instance, when a parent loses her job, there is violence in the community, or the car gets smashed, adults are distracted. When their stress level is up and their mental energies are focused elsewhere, adults have less psychic energy left over to respond to the child with attention and patience. The child may begin to feel unimportant or unworthy, which, likewise, may show up in “acting out” behaviour in the child.

If a teacher knows of a particular stress in a child’s life, it can be countered to some degree by making the child feel valued and important in the child care or preschool setting. It also can help if the teacher talks about feelings often and routinely gives children many ways to express feelings, especially anger, in appropriate ways.

Confronted with a child’s difficult behaviour, especially if it is consistent, requires two focuses. First, the teacher needs to stop/change behaviour that is dangerous to other children and unnecessarily disruptive, coaching children to express the same emotions in ways that are more effective for getting their needs met. Second, the teacher should try to discern the child’s motivation, such as an effort to feel powerful or gain more adult attention, and figure out how to help the child meet those needs in positive ways.

A good starter question when confronted with difficult behaviours is: “How can we make sure this child’s emotional needs are being met in our setting?”

A cooperative effort to gain insights from other colleagues who can observe the child and the parents who know the child best, but in a different setting, can help fit together the puzzle pieces of a behaviour management plan that help the child through a tough time.

None of it is easy; but when progress is made, it is tremendously rewarding professionally, and can help the child thrive in years to come.

Used with permission from Exchange Magazine.

For over 30 years in the field of early childhood education, Karen Miller has held a wide variety of positions, including classroom teacher and parents coordinator for Head Start. She was the director of four different childcare centres, regional and national training and education director for two national child care organizations and early childhood education editor for Scholastic Inc.’s Early Childhood Division. She was also a contributing editor for Child Care Information Exchange magazine writing a regular column called “Caring for the Little Ones,” focusing on infants and toddlers. She earned her Master’s Degree in human development at Pacific Oaks College in Pasadena, California.