The state of early childhood

Early childhood educators tell me a lot of stories when I keynote or train. And since I’ve been speaking and training for almost four decades, you can imagine just how many stories there have been. Lately, though, I keep hearing the same three stories from teachers throughout the country.

Here’s the first of what they’re telling me:

1. More children are unable to cross the midline of the body.

Sadly, this isn’t surprising, considering one paediatrician’s contention that infants are spending upward of 60 waking hours a week in things, like car seats, high chairs, and such. One of my colleagues calls this “containerised kids.” Another refers to it as “bucket babies.” Funny names for a not-so-funny situation.

In some ways the problem dates back to 1994, when the American Academy of Pediatrics created the Back to Sleep campaign to reduce the incidence of Sudden Infant Death Syndrome (SIDS). Happily, the suggestion that babies be put on their backs to sleep had the desired effect. Unhappily, people seemed to forget that the second part of the campaign slogan was “Tummy to Play.” As a result, fewer babies are spending time on their tummies, meaning that, among other things, they’re not developing the muscles necessary for crawling and creeping, cross-lateral movements that promote the ability to cross the body’s midline. 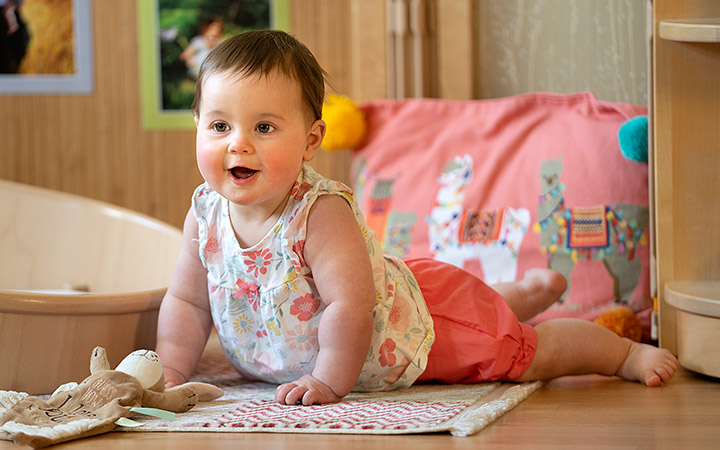 Tummy time for babies is critical for developing the muscles necessary for cross-lateral movements.

Another factor is the busyness of daily life in our society. Parents are in a hurry, and manufacturers and marketers have presented such solutions as car seats that can be carried from the car to the home and used indoors while mums and dads get dinner and take care of the many other chores awaiting them at the end of the day. Mostly gone are the days of the playpen, which may have seemed to some to be “cage-like,” but which at least offered the baby freedom of movement! She could roll over, slide on her belly, move on hands and knees, pull herself to standing, and bounce—without the aid of a confining bouncy chair. She could even practise walking while holding on.

As a result of today’s sedentary behaviours, children are not only unable to cross the midline; also, they grow up lacking confidence in their movement skills. And children who feel “clumsy” or “klutzy” are children who won’t take part in any physical activity, let alone the recommended minimum of 60 minutes daily. This has a grave impact on their physical and social/emotional health.

Additionally, Dr. Marjorie Corso conducted research in which she discovered that there’s a correlation between body-space awareness and paper-space awareness. One example of this is that children unable to cross the midline of the body were sometimes reading and writing down the vertical centre of the page. Sometimes they even wrote halfway across the page, turned the paper over, and started again!

The question now, of course is: what are we to do about all this?

The answer is simple, really: we let children be children! They’re born with a love of movement. If we give them the time, the space, and the opportunity to move, nature will take its course!

But we can also be a bit more intentional. We can encourage cross-lateral movement by inviting children to get on the floor and move like kitties, puppies, snakes, seals, and spiders, and by playing “mirror” games using movements that cross the body’s midline.

When I did my first professional development training in 1981, never in my wildest imaginings could I have foreseen teachers complaining that children don’t know how to play. Yet this is the second thing I’m hearing from educators on a regular basis.

This is especially shocking because pretty much every young animal on the planet plays. It’s how they learn to be who they are! Kittens stalk each other in preparation for stalking birds and mice. Puppies and fox cubs engage in rough-and-tumble play to learn social skills. When ground squirrels play, they go on to be more coordinated and better mothers. Many animals, it seems, play simply because it feels good. 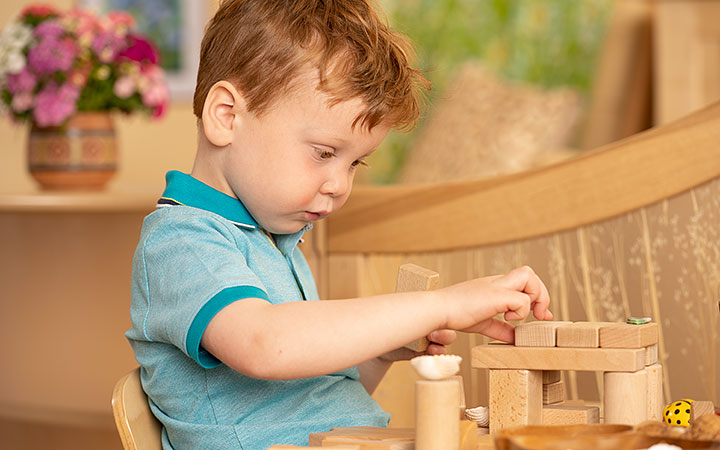 Children need to be given the time, space, and materials to encourage play.

Play is an essential part of nature’s plan. And if children are at a loss as to how to play, then something is seriously wrong.

Think back to your own childhood. I’m betting that a great many of your memories involved playing—much of it outdoors. I remember games of pretend (frontier woman comes first to mind) that engaged me for days on end. I couldn’t wait to get outside to continue the saga. The dramatic play stimulated my imagination and has served me well in the years since.

I remember learning how to do cartwheels down the middle of the road. I didn’t go on to become a gymnast, but mastering that particular skill after much, much hard work demonstrated what could be achieved with determination and persistence.

And I remember the friends I played with. Interacting, negotiating, and creating with them absolutely taught me how to be part of society.

So it’s worrisome when teachers tell me that children only know how to imitate characters they’ve seen on screens, or that they go outside and simply stand around because they don’t know what else to do.

Some of the reasons behind this aberration are painfully clear. Between digital devices and television, children have a multitude of images at their fingertips. They have no need to imagine because marketers and video producers have already done all the imagining for them. As a result, when asked to expand their minds and be inventive, children can’t get beyond what they’ve previously seen. Thus, their dramatic play involves characters and scenarios already familiar to them.

And, of course, there’s the structure of their lives. The days of today’s children are scheduled beyond anything most of their predecessors experienced. Children in earlier times had downtime and faced boredom, learning how to use both to their benefit.

Beyond the lack of downtime, over-scheduled kids simply don’t know how to make decisions for themselves, because they’re used to being told what to do. It’s no wonder, between school and organised sports and lessons, that when set free upon a playground, they’re at a loss as to what comes next. It’s simply not possible to switch from being adept at taking and following orders to being a self-starter.

So, what are early childhood professionals to do when they discover that the children in their care don’t know how to play? The same thing they do with every other aspect of early childhood education: they facilitate learning.

Part of that facilitation comes in the form of offering children the space, time, and materials necessary to explore. If children aren’t overscheduled in the classroom, and they have a variety of materials that stimulate the imagination, dramatic or constructive play are the likely outcomes. When there are plastic hoops, a variety of balls, and plenty of loose parts outdoors, active play is more likely to occur. But, even then, they may need more from you.

When a child is “stuck,” imitating a character or standing motionless on the playground, you can join the play, modelling the possibilities for taking the play further and asking questions that provoke new responses from the children—for example, “What do you think I should do with these twigs?” Once they’re engaged, you can simply step away, avoiding the temptation to make the play adult-directed, and the possibility that the children will come to rely on you for what comes next.

3. The children have no fine motor control.

On and on it goes—much of it coming from kindergarten and first-grade teachers. And the sad part is, this isn’t a surprise at all.

There are two major reasons why. The first is that the little ones are far more likely to be holding a digital device these days than a crayon or pair of scissors. Go to any restaurant where families dine—or to a doctor’s office, or anywhere else parents and kids gather—and you won’t see a child colouring while the family waits. They’re not even talking to each other because they’re all too busy engaging with their own cell phones or tablets. If they’re using any muscles at all it’s simply to swipe a screen.

Children who grow up swiping instead of colouring, cutting, and painting do not develop the fine motor skills they need to hold a pencil and write. To button and unbutton their clothes. To properly hold a utensil for eating. To use a stapler, a bottle of glue, or a toothpaste tube. 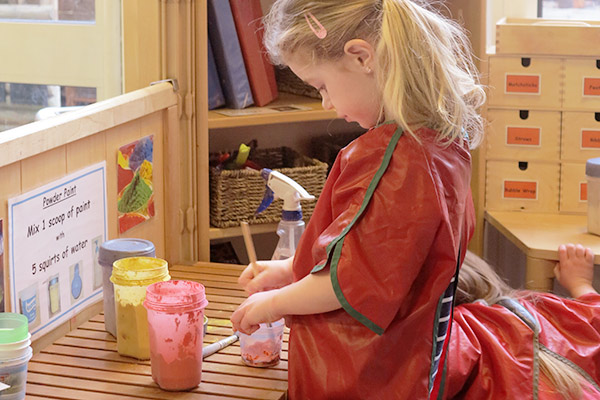 Children need to be given lots of opportunities to develop both large and fine motor skills.

The second reason this trend isn’t surprising is that children are spending so little time crawling, running, jumping, and climbing these days. To those unfamiliar with motor skill development, that might seem like a strange connection. But the fact is that control over the body develops from the top to the bottom of the body, from the inside (trunk) to the outside (extremities), and from the large muscles to the small muscles. That means that until the trunk and large muscles are matured, the small ones in the hands won’t fully develop. This is nature’s plan. This is immutable. And this is why many experts have said that the best way to help children learn to write is by letting them climb trees or swing on monkey bars.

This pattern of development doesn’t mean that children can’t practice their fine motor skills until their large muscles are ready. On the contrary, young children should have plenty of opportunity to practice and grow their fine motor skills; and they should have plenty of appropriate materials and objects with which to do it. According to occupational therapist Christy Isbell, in her book, Mighty Fine Motor Fun , these include “a wide variety of open-ended materials such as paper, drawing utensils, glue, clay, and small blocks.” Christy also tells us that the children “should spend more time playing with manipulatives than practising writing skills”—because if young children are pushed to write before their hands are physically ready, it may have a negative impact.

Naturally, while they’re doing all of this fine motor practice, children should also have plenty of opportunity to crawl, run, jump, and climb!

If the children themselves were allowed to choose how to spend their time, they would be playing, as they were meant to do. And that play would involve and improve both large and small muscles, as it simultaneously developed their brains, resilience, problem-solving skills, and all the other wonderful attributes they were meant to learn through play. Instead, adults—either because they don’t truly understand, or are in too much of a hurry—are ignoring the laws of child development. And, sadly, children are paying the price.

ABOUT THE AUTHOR
Rae Pica
Rae Pica has been an education consultant specialising in the education of the whole child since 1980. Rae is a former adjunct instructor for the University of New Hampshire and is currently a blogger, online course creator, and popular keynote speaker. Check out her YouTube channel, Active Learning with Rae, and learn more about her keynotes, consulting, and books, including What If Everybody Understood Child Development? and Active Learning Across the Curriculum, at www.raepica.com.

More from Standards
Article
Standards of experience
How should the sentence “All children shall come to school ready to learn” be completed? Ready to learn what? Probably it could end “ready to learn whatever the school wants them to learn.”
Article
What makes a good childrens book
There were more than 5,000 children's books published last year, twice as many as in 1975, but how is a teacher to choose the right books?
See all Standards articles