The rules of play

While to a casual observer it may seem that children involved in pretend play are acting totally spontaneously in ‘free play’, in fact they are imposing their own set of rules. A child playing with a small world farm will drive the tractor around the fields and carefully into the barn, but he is unlikely to make it fly. I once observed three children in a home corner, sitting on a sofa and staring intently at an empty box which was their television. One had possession of the “remote,” represented by a wooden block from a construction set, and they periodically engaged in heated discussion about whether to change the channel because they wanted to watch different programmes, or whether the volume should be turned up or down.

Through experiences like these children practice their growing self-control and learn to govern their impulses – to think before they act. Giving a particular meaning to an object or situation, and especially personally taking on a role, involves accepting boundaries on how to behave. Mothers and fathers go to work and make the dinner, but not babies. Babies cry, while grown-ups take responsibility for caring for and calming the babies. Even fantasy characters behave according to some rules. They may or may not be able to fly, and their magic weapons have some powers but not others. The limits may change as the play progresses, and children may continually re-define who they are and what is happening, but then it is necessary to acknowledge an author’s re-write: “No, you be the monster. Pretend I’m flying and I have my zapper.” Children who show self-restraint in following the shifting rules of the play gain the great pleasure of belonging, as they develop cooperative play with others. 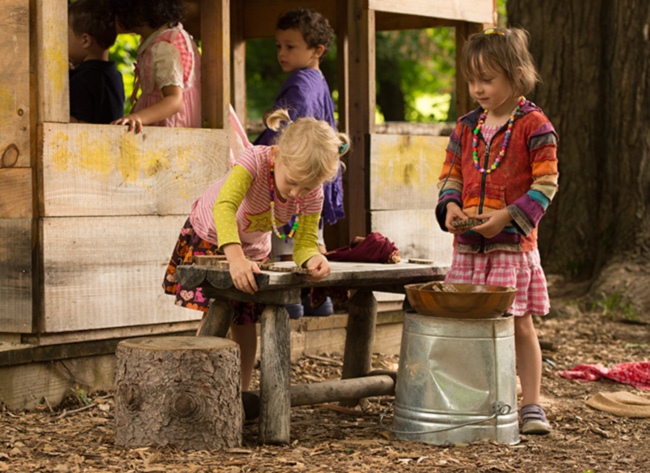 Orderly games with rules can also be introduced to children at a very young age. In some ways, they are an extension of early turn-taking exchanges and games like peek-a-boo that have an orderly structure. Board games with players taking turns, perhaps with a spinner or dice followed by moving a piece, or lotto games where covering a square follows a rule and a particular sequence, help children to learn to control their impulses and regulate their behaviour within a structure that they can understand.

One particularly strong support for children in developing cognitive self-control is the use of language. As children begin to mentally tell themselves what to do, rather than just reacting impulsively, they use words to make their thinking clear to themselves. Private speech – children talking aloud to themselves as they describe what they are doing and tell themselves what to do next – has been linked with internalising messages from others about strategies, values, and skills and gradually making these their own. Young children use this self-talk to work through their ideas, to consider obstacles, to remind themselves of skills, and to manage their emotions. Private speech is a feature in most activities for young children but is particularly prominent in imaginative play, possibly because pretend play provides an endless stream of challenges to thinking and behaviour as children encounter or create problems to be solved.

In early simple dramatic play, children begin to represent concrete actions they have done themselves such as eating their dinner, or seen others do such as driving a car. Moving into more complex socio-dramatic play, however, brings additional cognitive challenges that further develop thinking abilities. A plot is developed, with a sequence of events and a range of problems to be solved. The players need to meet the challenges of negotiating different roles, considering different perspectives both of the characters and of the real life players, and remaining open to the ‘as if’ thinking of others. Pat Broadhead, researching social and cooperative play, has demonstrated the high cognitive challenge for children involved in cooperative role play particularly when it is open-ended – using a range of versatile resources in what she has called the “whatever you want it to be place.”¹

Make-believe play has been shown to contribute to self-regulation, with greatest benefits for the most impulsive children. Working with three- and four-year-olds from middle-income families, researchers looked at changes over several months in elements of self-regulation including independently tidying-up and attention and cooperation during circle time. When they controlled for other factors such as language ability, they found greater improvement in self-regulation among the children who had spent more time in complex socio-dramatic play – including pretend representation of objects, cooperating with others, and talking in role as characters.²

When the same researchers, however, looked at deprived children in Head Start classes in the United States, they did not find a benefit of make-believe play for children’s self-regulation. They noted that among these children much of the play content was violent, and cited other research linking aggressive behaviour and violent play themes. They also note other research indicating that children with violent fantasy themes may have more models of aggressive behaviour in the home, while the children who used non-violent play themes developed more complex cooperative narratives in their play.³ There has been much consideration in recent years about play themes, most often employed by boys, which involve superheroes, weapons and often boisterous activity. Penny Holland, in her book We Don’t Play with Guns Here,⁴ has challenged practitioners to reflect on their practices in respecting children’s play themes, while acknowledging the role of the practitioner in supporting this play to move beyond repetitious physical activity.

Children who consistently use the toy dinosaurs simply to make loud roaring noises and bash them together, for example, will not be making significant headway in learning to think through and control their actions. An adult may, however, be able to join the play and enrich the narrative through introducing another dimension to the play – the dinosaur might cry, or need some help because he’s hurt, or perhaps he’s really hungry and wonders how he can get enough leaves to fill his big stomach, or he could be looking for his friend.

This is a useful reminder that it is not enough to assume that when children are playing, they are learning – and nor are they necessarily developing their learning potential. Play skills develop over time and often children who are older or more skilled players support others to join in, scaffolding development of more complex play. Where this is not occurring, however, early years practitioners can sensitively enhance the complexity of the play to enable children to benefit. A skilled adult can judiciously join in with fantasy play and act as a play tutor, modelling and sparking ideas about problems to solve, extending ideas about characters, settings and props, and supporting cooperative negotiation about how to play.

From How children learn – The characteristics of effective early learning by Nancy Stewart, now available as an eBook from Amazon, Kobo, Apple Store and other e-book retailers. Used with permission of the author.

Nancy Stewart is a teacher, consultant and trainer with expertise in early years development and learning, and quality improvement in teaching and provision. She has worked with Department for Education policy teams in implementing national programmes, and in drafting revisions to curriculum and assessment in the Early Years Foundation Stage review. Early communication and language for thinking is also a prime area of interest and expertise, along with children’s development as self-regulated learners.