It is many years since Froebel, followed by American educator Caroline Pratt, focused the eye of early childhood educators on the value of the ‘unit block’ and block play. Block sets are now readily available containing the full range: the base unit block, doubles, quadruples, halves, triangles, ramps, cylinders, and arches. The wooden unit block has become a password, the core of the curriculum for many who work with groups of young children. Have you ever stopped to think why this is so? Just why are they so brilliant? 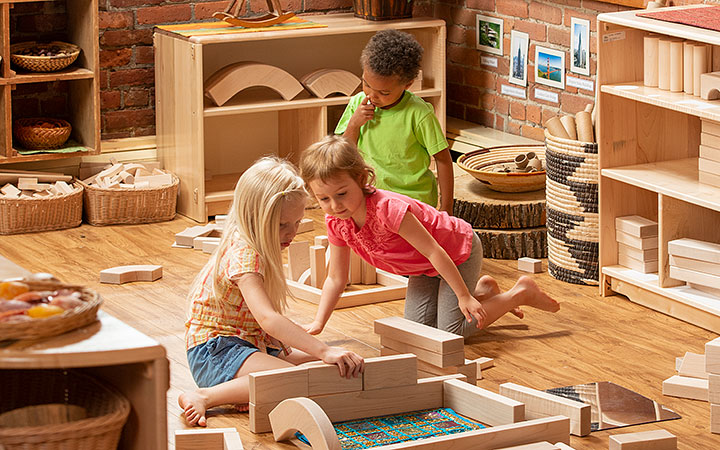 Block play offers a vast range of experiences. Through interrelating, the social skills of language and communication develop. Teachers note improvement in fine and large muscle control and of motor skills such as lifting, stacking, and balancing. Block play is developmental, for it progresses as a child discovers and applies new possibilities. It offers natural exposure to likenesses and differences of shapes, counting, sizes, and amounts. For four, five, and six year olds, block play becomes a doorway to discovery of maths, technology, engineering, design and even architecture. Frank Lloyd Wright said his decision to become an architect was shaped by playing with blocks. As children naturally group and regroup during block play, interaction leads to cooperation in ideas, construction, and problem solving. Imagination is integral to block play. Children learn to create, bouncing ideas off one another and thinking for themselves, thus fulfilling the ultimate goal of education.

Each child is unique, and personalities often surface during block play. A shy or insecure child may create a safe haven in his building. The diffident child may gain confidence, because there is no right or wrong way of building with blocks. A frustrated child may find release in knocking down towers.

The teacher’s role in block play

The teacher’s role in block play is vital, to know each child and to quietly observe. Your presence in the construction area will build children’s confidence. Be an enthusiastic bystander, ready to ask open-ended questions that begin with ‘Why do you think…’or ‘What if…’ But never make suggestions unless it becomes necessary to intervene should a child need encouragement to get started or for safety reasons. Be ready to provide accessories or interesting materials that might add play value. By being quietly present, the teacher supports children’s happy focus. 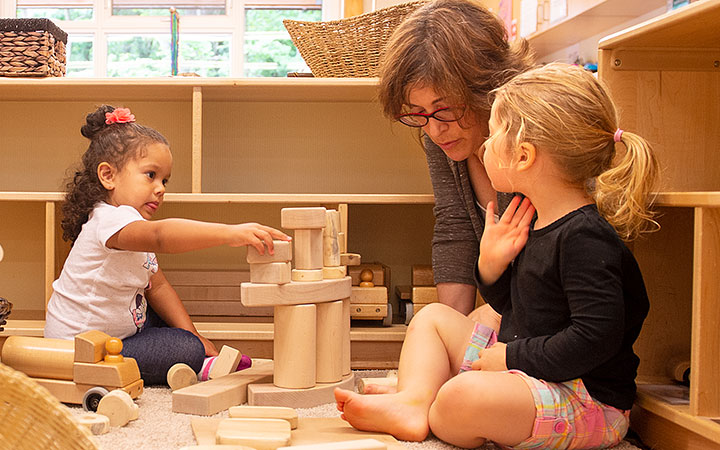 Setting up the environment for block play

The time element is all-important. If you only have fifteen or twenty minutes, don’t attempt block play. Allow enough time for the children to become engrossed in what they are creating.

Location and care of the block set are important too. A well-made cared-for set of blocks will outlast decades of children. Establish a designated area for block play. Nursery planners recommend a room corner, which provides protection from traffic. Or define the area with pieces of furniture such as the block shelf or low cabinets, thereby providing security and teacher visibility. The group will need to think through basic rules, such as no throwing of blocks and respect for others constructions.

Let children save their creations at the end of the day whenever possible. This allows learning to be extended over time and shows children that their work is respected. When it is not possible to save constructions, take a photo to display. Before packing up, use the opportunity to acknowledge each structure. Recognition of work and effort is important, building confidence and inspiring further intense block play.

Clean up is a life skill and can be a positive experience. Be sure to allow plenty of time. Because children are not time-conscious, cleaning up in an efficient fashion is a skill that needs to be learned. It can be made into a game: see which team will be done first! Bulldozers and lorries can help. Teach children to put blocks back on storage shelves in an orderly fashion, with the heaviest and largest blocks lowest, and each kind kept together. It may help to label shelves with outlines of the shape of blocks stored there.

The seven stages of block play

All children seem to pass through seven stages in block play, which Harriet Johnson has documented.

The youngest children learn through their senses, so a young child may be seen unconsciously stroking wooden blocks, enjoying the feel and shape (in a way never seen when handling plastic). It is fascinating to observe a child’s development, from a toddler carrying blocks around, to a four-year-old builder of highways and towers, and eventually to the five year old and his peers planning and building castles and caves for knights and dragons, then acting it out in dramatic play. The rate at which children pass through these stages depends on their exposure to block play. Even an older child coming into contact with block play for the first time will begin at the earliest stages. In her book The Art of Block Building Harriet Johnson has listed these stages. To summarise:

Karen Miller, early childhood author and consultant, says, “Unit blocks have such intense value; they touch every area of curriculum, every area of child development. It is no wonder that many educators recommend unit blocks as the first and foremost purchase in setting up a nursery.” 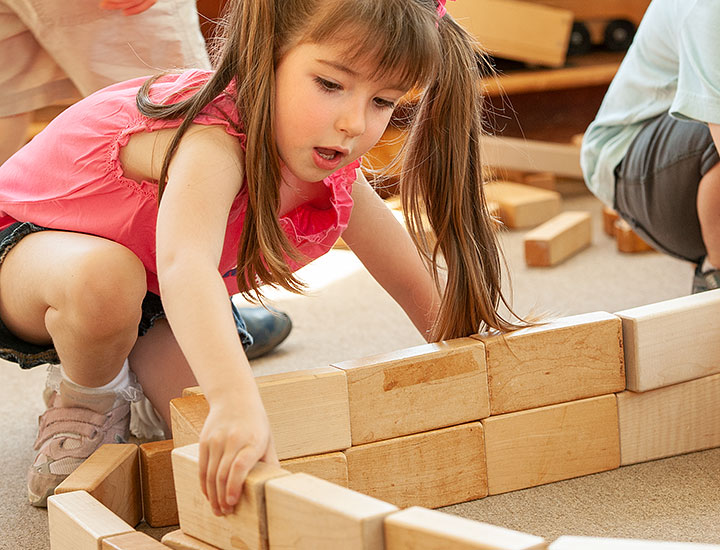 So, brilliant building blocks? Yes, brilliant! As Friedrich Froebel said nearly two centuries ago, “Each is a self-contained whole, a seed from which manifold new developments may spring to cohere in further unity. They cover the whole field of intuitive and sensory instruction and lay the basis for all further teaching. They begin to establish spatial relationships and proceed to sensory and language training so that eventually man comes to see himself as an intelligent rational being and strives to live as such.”

MaryBeth Withers has taught young children for many years and worked in design and documentation at Community Playthings.

More from Block play
Article
Froebel’s gifts and block play today
When Friedrich Froebel gave his cousin a set of wooden blocks for her two young sons as a present and asked her to observe how they played with them, he gave us two gifts in one – a practical resource designed for children’s learning and…
Article
Playing and learning with blocks
A lot of emphasis is put on reading, writing and storytelling and maths, but actually, if you can’t be creative, how can you solve problems? That’s what the blocks help you to do – you turn a problem over, not only in your mind, but you…
Article
Open-ended play at home!
As the COVID-19 pandemic impacts almost every area of our lives, many of us find ourselves in unique new positions. For example, unable to send our children to nursery, we must now occupy and teach them at home. How can young children’s…
Article
Block play and spatial skills
Many early childhood experts have documented the value of blocks for children’s learning, offering evidence that when children are given time to plan, construct, and create with blocks, they develop socially, emotionally,…
See all Block play articles
Explore Block play Products
Explore Block play