Making sense of the world

Oliver and Zara, both four, were playing daddy and mummy outdoors. They made stick “children”, and then Zara said, “Let’s make a banquet for our children!” Oliver replied, “Banquet! What’s a banquet?” Zara explained, and they laid leaves on a stump as plates. Then they dished out seeds and flowers to represent various foods. They were busy for about 45 minutes, talking all the time.

Many areas of learning were served in this one activity. The teacher witnessed shared sustained thinking. She saw how Zara and Oliver learn from one another and use their imaginations in original, creative ways. Their play showed initiative and advanced social skills in planning, co-operation and communication.

Role play is how children make sense of their world, acting out experiences, ideas or stories. Imagination, which is at the heart of children’s role play, is more important than knowledge according to Albert Einstein, “for knowledge is limited, whereas imagination embraces the entire world.” Role play takes place throughout the setting, indoors and out. It can be encouraged in a specific area where props to further the play are provided. Arches, windows and fabrics invite children into the role play area and cosy nooks allow them to withdraw for solitary and imaginary play. Natural and recycled materials extend children’s play in open ended ways. 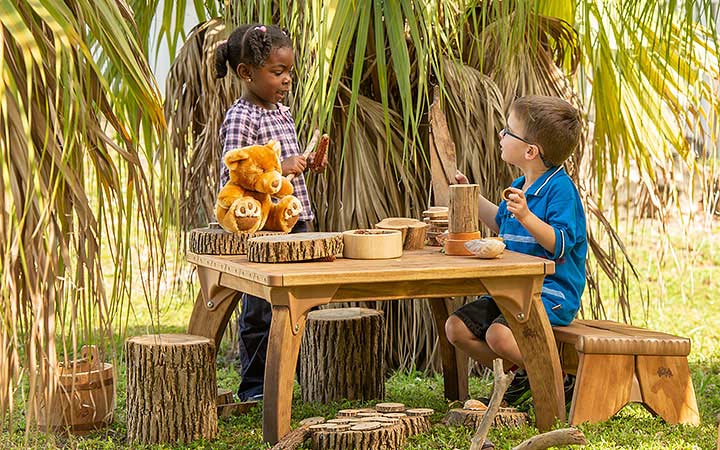 Exploring and using media and materials

This article is adapted from a chapter from Play and the revised EYFS, © Community Playthings 2015.

ABOUT THE AUTHOR
Helen Huleatt

Helen Huleatt worked for many years as educator and as staff writer for Community Playthings.

More from Role play
Training resource
Open-ended play
When free to experiment with the simplest materials, children find ways to express and develop their thoughts in imaginative play.
Video
A world worthy of its children
Listen to these words about children and education from the famous musician Pablo Casals, and let them inspire you for the future.
Article
Open-ended play at home!
As the COVID-19 pandemic impacts almost every area of our lives, many of us find ourselves in unique new positions. For example, unable to send our children to nursery, we must now occupy and teach them at home. How can young children’s…
Article
Let's play outside
Collaboration, creativity, imagination, inventiveness, problem-solving, coordination, physical strength – when children are given the space and time to freely play outdoors, truly the whole child is able to grow.
See all Role play articles
Explore Role play Products
Explore Role play