Reggio Emilia is a prosperous town in the hills of northern Italy, rich in culture and famous for its vintage basil vinegars, Parmigiana cheese, and Lambrusco wine. But it is also home to a programme of early childhood education that has gained international repute in the last quarter century. The first schools were started by parents in 1945 as an alternative to the strait-laced, church-monopolised institutions that dominated Italian early education at the time. The number of these parent-run centres rose steadily, and in 1967 the municipality took over their administration and financing. The Reggio preschools (and infant-toddler centres, publicly mandated since the 1970s) are available to children from birth to six regardless of economic circumstance or physical disability, and continue successfully to this day.

What were the goals of these parents of Reggio Emilia? Amidst the rubble of post-World War II Italy, they raised from almost nothing, preschools that would far exceed the mere custodial services such provision – appropriated for the past twenty-odd years by Mussolini’s government – normally offered at the time. In the words of Loris Malaguzzi of Reggio Emilia, ‘War, in its tragic absurdity, is the kind of experience that pushes a person toward the job of educating, as a way to start anew and live and work for the future. This desire strikes a person, as the war finally ends and the symbols of life reappear with a violence equal to that of the time of destruction.’ And so a couple of trucks and several horses – battered remains of the retreating German army – were sold for hard cash, and from this tiny capital the first school was begun. Women scraped and stacked bricks from bombed buildings. Men worked nights and weekends; children helped where they could.

“Our task, regarding creativity, is to help children climb their own mountains, as high as possible.” Loris Malaguzzi

News of the experiment soon got around. Soon other schools were popping up in disadvantaged wards of the city. Intrigued, a young teacher began volunteering part time, and ended up staying. Loris Malaguzzi was to provide dynamic leadership to the movement, that would continue till his death in 1994. After leaving his post teaching in the public schools, Malaguzzi studied psychology in Rome, where he took inspiration from such thinkers as Vygotsky, Dewey, Piaget, and Bruner. Bruner and Vygotsky’s recognition of the child’s natural problem-solving capacities, and of the role of culture in developing the mind, fit in well with Malaguzzi’s own perceptions. John Dewey believed that true education should stimulate a child ‘to conceive of himself from the standpoint of the welfare of the group to which he belongs.’ If any one concept embraces all other aspects of the Reggio curriculum and environment, it is this one.

The new preschools grew at great personal sacrifice, and demand grew as well. In the early 1950s, when television became commonplace in Italian households, many people from the poorer south migrated to the semi-industrial north. As women left their homes to work, they wanted quality care for their children. Family is important in Italian culture, and parents were determined to keep it that way. Against this backdrop it was natural that the preschools should be cooperative entities, characterised by major parental involvement. (Hours of overtime and weekends devoted to school projects are considered normal for parents and staff in the Reggio schools even today.)

From the start, the Reggio early childhood programmes reflected spontaneity and responsiveness to new ideas – an ‘emergent curriculum’ that was a far cry from the rigidity of the public schools. As Malaguzzi described these after leaving his job as a middle school teacher, ‘The work with the children had been rewarding, but the state-run school continued to pursue its own course, sticking to its stupid and intolerable indifference toward children, its opportunistic and obsequious attention toward authority, and its self-serving cleverness, pushing pre-packaged knowledge.’ By contrast, in the new school there would be a conscious embracing of surprise, of not-too-much-certainty, an acknowledgement that as life itself is unpredictable, so must education be.

So it was natural – if revolutionary – that the Reggio curriculum would be a fluid one, without prescribed outcomes. Long-term in-depth research projects, emerging from the pupils’ interests, constitute the primary path to learning – one of the outstanding features of Reggio that inspires, and unnerves, more conventional settings. Malaguzzi observed, ‘[Children’s] own timing and rhythms demand enormous respect. Children need the support of adults in order to combat the accelerating pressures and haste to make them grow up, which is not only a treacherous sign of the subversion of biological, psychological, and cultural relationships that is currently in vogue, but also a sign of deep insecurity and a loss of perspective.’

Weather, rainbows, sunlight, city life – everyday subjects, rather than remote or academic ones, provide fruitful means of discovery in the long-term projects. Exploration is facilitated by the environment, which is considered the ‘third teacher.’ Every centre includes an atelier (art studio), and often mini-ateliers (art corners) adjoining the individual classrooms. An atelierista (professional artist) is a standard member of staff, complementing the work of the teachers by helping children communicate in their ‘hundred languages,’ as Malaguzzi referred to children’s many ways of expressing themselves (through art, music, or shadow play, for example). 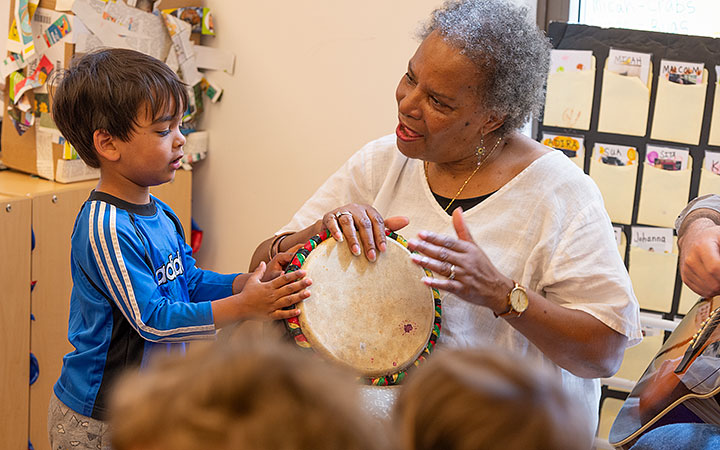 Extensive and continual documentation of children’s activities by staff – via handwritten notes, photographs, videotapes, and so forth – is a hallmark of the Reggio programme and serves multiple functions. It guides children forward by helping them review where they’ve been; clues staff in to children’s progress and helps them reflect on their own practice; and informs parents and the wider community of the work of the school. Characteristically, documentation panels line the walls, depicting projects that the centre has done over time, thus transmitting and evolving its own distinctive history from year to year. In addition, a pedagogista is assigned to working with a group of schools, building a unified approach between settings, encouraging and mentoring staff, and heightening awareness of the theory underpinning practice.

Besides encouraging research and exploration, the Reggio environment transmits other messages to youngsters. The layout of a typical school echoes that of the city, with a central, indoor piazza or common area representing the traditional Italian town square – where buddies pass the time of day, bands march, marketers sell their wares, or families stroll of an evening. As in the city, the school’s piazza serves as a place where children can intermingle or get together in larger groups. (Smaller nooks are interspersed to honour children’s need for personal space.) The classrooms and kitchen/dining area open directly off the piazza, with no connecting hallways to interrupt continuity. The children can observe the cooks at work, and frequently help with meal preparation and cleanup. There is great freedom of movement between areas, including the outdoors. By design, the centre itself becomes part of the city, and the children can see its activities unfolding around them.

The welcome area is also significant in a Reggio school, as the place where the worlds of school and city intersect. Couches may invite parents to linger, with low windows providing kids’-eye views of incoming friends. Staff make conscious efforts to speak with parents as they bring their children or pick them up at the end of the day. They provide parents with notes or photos of the child’s activities that day, aware that both home and school life comprise education and should be closely coordinated.

Reggio settings typically make marked use of natural and artificial light, with floor-to-ceiling windows and pale walls that offset the children’s colourful clothing and artwork. Some areas have lighting that can be varied by the children for different effects. Mirrors abound, reflecting light in multiple dimensions, as well as supporting the child’s construction of her self-image. Often, an internal courtyard brings the seasons and weathers to the children’s consciousness, thereby connecting the indoors and outdoors.

If the Reggio environment plays an important role as ‘third teacher’, the first teacher (the parent) and the second (the classroom teacher) are even more important. Parents are involved in school decision-making, kept thoroughly up-to-date on their child’s progress, and depended on for information about their child’s home experience. They also join in regularly with children’s activities and help on their projects. As for staff, from teacher to atelierista to cook, the task of each is considered of equal worth and there is no administrative hierarchy or payment scale. Teachers always teach in teams of two, collaboration being considered tantamount to strength. Six non-contact hours weekly support the teachers’ demanding tasks of documentation, project guidance, and liaising with other staff and parents. The credentials prerequisite to a pre-primary teaching post in Italy are comparatively few. Therefore, co-teaching is seen as a necessary part of every young Reggio teacher’s training.

Finally, one might surmise that children could be named the ‘fourth teacher’ – if not the first – in the Reggio programme, for they are valued as ‘teachers’ in their own right, to be learned from, listened to, and respected. Children are seen as being born complete with the ability to discover the world they have entered. The teacher’s role is never one of superiority or dominance, but of listening and guidance. Strong bonds form between teachers and children, who stay together through a three-year span. 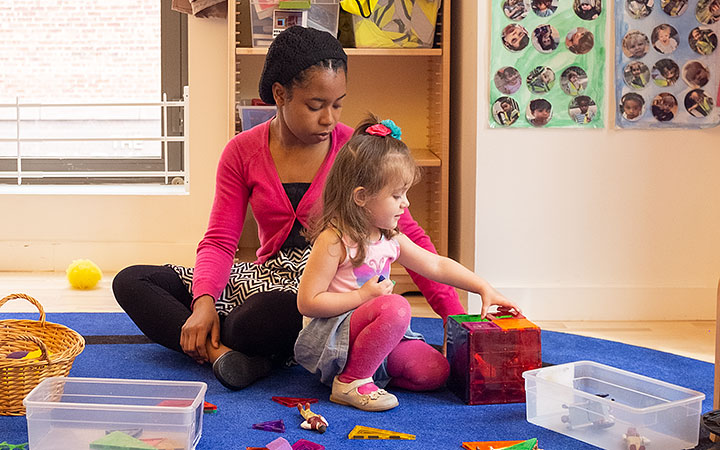 So how can acquaintance with Reggio Emilia’s methods benefit those of us who work with children in other parts of the world? Foreigners who visit Reggio Emilia’s preschools are predictably wowed by what they see. The vibrancy of the settings and the advanced work produced by very young children is, at the least, impressive. Visitors often wonder how the principles used might be transferred to their own nurseries back home. This is how it should be, provided the difference in culture and history that every centre inherits is acknowledged and valued. The soundest educational practice, as Reggio’s most avid participants themselves tell admirers, is a continually evolving one where practitioners take the best of the many systems that have been developed to date and adapt it to their own situation. A love for children and openness to change are the starting points. With these, anything is possible.