The importance of schemas in every child’s learning

The importance of schemas in children’s self-initiated and spontaneous play has become a valued and embedded part of early childhood practice. Schemas are those repeated patterns seen in  children’s behaviour, and they link directly to the development and strengthening of cognitive structures in the brain. The revised Early Years Foundation Stage (EYFS, 2012) requires practitioners to look, listen and note down children’s interests as a starting point to becoming familiar with each new learner. Subsequently, many practitioners have become very skilled at spotting schemas. However, once these are identified, practitioners do not always know how to ensure that a child’s schematic interest is directly reflected in their planning.

It is important to point out that schemas operate at four distinct levels in children’s development: Level 1 – Sensorimotor, Level 2 – Symbolic Representation, Level 3 – Functional Dependency and Level 4 – Abstract Thought. To aid  understanding, this article will illustrate the ‘Transporting Schema’ at each of the levels noted above.

The Transporting Schema is defined as: ‘an interest in moving themselves around, and in  transporting objects’. Once they are mobile, babies and children begin to move objects and themselves from one place to another, using bags, bikes and trucks etc.

In  early childhood practice, it is well established that children learn through their senses, absorbing information through what they see, taste, touch, hear and smell. Their complex multisensory interconnections act as the main source of information from the brain, and these, in turn, strengthen their cognitive structures (schemas).

For some time, Jack, aged 18 months, has shown an interest in moving things from one place to another. On a recent visit to B&Q, he persisted in transporting a range of objects. He was first observed trying to move several pots of paint. However, after many attempts, he discovered that these were too difficult for him to lift or carry. He then found a pot of Rosemary that he could manage; rather than using a basket, he chose to transport this with his hands, all the way to the checkout. On the way out of the store, Jack found a large plastic ‘wet floor’ sign that he also attempted to move.

Jack‘s interest is in moving things and with his hands. He is learning through his movement and feelings, that some things are heavy and others are light and big things can be light too.

Symbolic Representation is when children use one thing to stand for something else. For example a  child might use a leaf to represent money symbolically in a pretend game of going shopping.

Isobel, aged 24 months, was observed moving single pieces of a train track. She spent ten minutes trying to carry them from inside her classroom into the garden, each time placing pieces into her buggy. Once the buggy was fully loaded, she told her practitioner: ‘Me go shopping.’ The practitioner asked her if she had any money; Isobel replied ‘yes’, pointing to her pocket.

From this observation one can tell that Isobel is interested in journeys, and with moving objects. Her pretend play, of going shopping, helps her to act out and connect her experiences. She pretends that the pieces of train track are her shopping, and that she has money in her pocket. It is clear that she is deeply engaged in developing her understanding about moving and classifying things that are the same.

Functional Dependency is a child’s use of prior knowledge; it is when children are able to draw on knowledge that they have already absorbed and assimilated into their cognitive structures.

Oliver, aged 40 months, was observed playing with some guttering in the garden. The scenario that follows shows how he uses the Transporting Schema at this level of Functional Dependency. 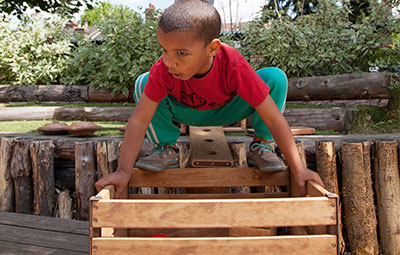 After leaning the guttering up against the garden wall, Oliver goes inside and returns with three cars. Though he is able to lift each length of guttering up onto the wall, he cannot reach the end to put his car down it. He therefore goes back inside and returns with a crate, which he places next to the guttering. He stands on the crate, but is still not high enough. His next solution is to return with a hollow block; this is placed on top of the crate. He then lowers the guttering,  slightly, so that he can reach the end. Problem solved, he puts the cars in the guttering, jumps off the crate, and waits for them to come out the other end. He then collects his cars and repeats this over and over again. Oliver is applying his prior knowledge about height and gravity to aid his play.

Abstract Thought is when children use talk to describe events, objects or experiences – sometimes repeating information that has been given to them, in the absence of concrete cues. In this way, children demonstrate that they have taken in knowledge, adapted and assimilated it, later using this to reproduce their own new ideas, whilst talking about things that interest them.

Max, aged 46 months, was very interested in holding and moving a pot, which contained a caterpillar, around the garden. When one of the practitioners mentioned the caterpillar’s chrysalis, Max said: ‘it’s getting bigger, and bigger and bigger. It’s like when we grow up and we have a new house and we get a boyfriend, and then we get a baby’. The practitioner asked him who had told him that. Pointing to his head, he said, ‘no-one, I just know it in my mind’. Max is observed using his memory and his ability to immediately recall bringing his real-life knowledge into his explorations, showing his ability to think abstractly.

Observing, assessing and planning for schema

The observational examples above demonstrate ways in which the same schema may be repeated in many different forms, and how schemas can be used to explore a range of physical movements, symbolic representations, and technical understandings about cause and effect, and abstract thought. In this case the transporting schema has also enabled Max to have an understanding on the passing of time.

Schematic play enables children to act out experiences and take risks, testing out and talking about what they already know and can do. Furthermore, when children are playing with a concept or an idea that they know well, they are also building upon knowledge that they can then apply to a range of new experiences and activities. In this way, schemas (cognitive structures) are constantly being strengthened through active exploration, engagement, thinking and investigation. It is the opportunities for children go on visits and combine resources and materials, in real and relevant contexts, which makes that crucial difference in the enrichment of a child’s learning.

The revised EYFS (2012) acknowledges that schemas are an intrinsic part of child development, stating that practitioners should ‘encourage independence as young children explore particular patterns of movement, sometimes referred to as schemas’. This is further reinforced by this document’s outline on the characteristics of effective learning; for example, Exploring Learning – playing with ideas with which children are already familiar – focuses hugely on Symbolic Representation. Creating and Thinking Critically highlights the importance of children testing out their ideas through experimentation, and of practitioners providing opportunities for children to practise and refine skills in meaningful and relevant contexts.

The emphasis, herein, is that assessment must be based on an understanding of what is being observed. Therefore, practitioner knowledge of child development is vital throughout the assessment process, if there is to be recognition of, and an appropriate response to, the diverse forms of schematic play. Equally, a thorough knowledge about schematic levels provides practitioners with a framework which can be used to analyse where individual children are in their learning, thereby helping them to plan experiences that the child is most likely to be interested in.

With its emphasis on beginning observations with a good knowledge about how children are learning, the hope is that the revised EYFS planning stipulations will now prove more practically effective. If it helps practitioners to feel better supported in their endeavours to advance child-initiated learning, in ways that are relevant to each and every child, the benefits of early education will follow individuals far beyond this stage of learning.

ABOUT THE AUTHOR
Stella Louis, M.A.

Stella Louis is an early years consultant who has worked as a nursery nurse, nursery manager, DCE course coordinator and Early Years Training coordinator. She wrote her first book in 2008 on understanding children’s schemas. Stella has developed a sustained interest in working with parents and is involved in research on sharing knowledge and understanding of young children’s schemas with parents. Stella is a Froebelian-trained travelling tutor, working in the UK and in South Africa.

More from Schemas
Article
Understanding and encouraging toddler play
Children's play tells family members and early childhood teachers so much about development.
Article
The past, the future and the spirit of schemas
Going backwards and forwards in time, what do we know of the past and future of schemas in human development?
Training resource
The Nursery gym in action at Pen Green (DVD)
This DVD highlights the importance of physical activity and positive risk-taking for young children.
See all Schemas articles